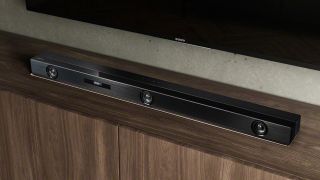 If you've recently picked up a Super Bowl TV deal, then these cheap surround sound system deals would be a perfect companion, ensuring you get the best quality audio with your video. However, they will also accentuate and bring your movies, TV and games to life too. Gone are the days when we have to settle of poor audio, or audio that only faces forward from our TV screens; now we can have it projected at us from all around the room on one of the best gaming sound systems going.

Right now at Amazon there's a few different sound systems discounted that could really make a difference, however you use your TV setup, but that look increasingly tempting with the Big Game and new consoles on the horizon. The pick of the bunch is probably the premium Sony Z9F sound bar and woofer that's got a $200 discount on it, bringing its price down to $698- its lowest ever price as far as we can tell. It's a deceptively simple setup with just the two items, but it'll present some of the crispest audio to you - Sony knows how to do audio after all. For those looking for something different however, and want to try some fun wireless audio for their TV setup, the JBL Bar 5.1 system is also at its lowest ever price, going for $499.95. This has detachable satellite speakers, that are battery powered, which can be removed from the main bar and provide excellent surround sound. Neat.

Increasingly this enjoyment can be had through multi-directional sound bar and sub woofer combos, which help to keep any big costs down, but the wireless trend has reached surround sounds too so there's plenty to choose from whatever your budget and needs and desires.

Sony Z9F Sound bar & sub woofer | $698 at Amazon (save $200)
The audio on this simple-looking setup up will be some of the clearest going. Perfect for gaming and the big game alike. It also looks like this is the system's lowest ever price from what we can tell too.View Deal

Sony HT-MT300/B Powerful mini Sound Bar | $198 at Amazon (save $150)
If you're tight on room then this little sound bar and woofer combo from Sony will provide a great solution with awesome - and big - sound. This is the black model but it's also available in white.View Deal

If you want something a bit more comprehensive but still with out breaking the banks then the is JBL offering is worth considering, and shows you don't have to throw money at big name brands as is often thought with sound systems.

JBL Bar 5.1 sound bar with wireless speakers | $499.95 at Amazon
This is the system's lowest ever price and offers JBL's own unique solution to going wireless with battery-powered speakers that are detachable from the main bar. Nice.View Deal

However, if you do want to go with a big name brand, then there's a bunch of Bose audio gear on offer too. These units will demand a premium - and you'll have to buy the sub woofer separately if you want that designated bass boost - but it's likely to be worth it if you can stretch your budget that far.

If you're going audio first and want to rethink your TV setup, then head on over to the TV sales pages over at these retailers for a wide selection of discounts:

For gamers, the sound systems here are all solid performers too, and would be great when teamed with one of the best PS4 Pro deals or the best Xbox One X deals.