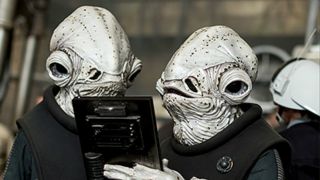 Entertainment Weekly has noticed that new images from Rogue One have been spotted on Topp’s Star Wars trading cards, giving us a peek of new characters and races.

Six trading cards have been released, and here’s a quick run-down of each image and who we think they might be.

This isn’t someone you want to bump into in the middle of a dog fight: she’s killed 80 enemy fighters judging from the yellow circles on her helmet, with each yellow blob standing for 20 enemy ships. Some think that this might be Evaan Verlaine, one of Leia’s buddies from the canon Star Wars comics who was mentored by Leia’s adoptive mother Queen Breha Organa.

A new face even for those who have read the comics, Merrick looks like he prefers to be in the heart of the action. Rumoured to be played by Ben Daniels, who Shakespeare buffs will recognise from Benedict Cumberbatch’s Richard III.

This furry beast might look like the next Chewbacca, but he’s actually a Gigoran mercenary. The respirator on his back helps him breathe and it looks like he’s fond of gigantic weapons which look suspiciously like a gatling gun (not a bad thing at all).

Many will recognise these chaps as they’re the same species as Admiral Ackbar, but they’re grey. Looks like they’ll be co-ordinating the Rebels, as they seem to be debating something on a tablet screen.

Edrio and Benthic Two Tubes are brothers (Edrio’s on the right and Benthic’s on the left). They’re mercenaries, allied with the resistance fighter Saw Gerrera, played by Forest Whitaker.

A slightly enigmatic title, but it looks like these are pilgrims on Jedha, the holy desert moon that’s sacred to those who use the Force. The pilgrims’ decorated cloaks look like cocoons which match Jedha’s desert, but what’s hiding underneath? They look like they’d be pretty good disguises for spies...

These chaps look different from the ones above, so perhaps there are pilgrims from different sects come to Jedha. Or maybe they hail from a different planet - we’ll find out soon.

Pretty self-explanatory, but it looks like he’s somewhere tropical, teasing one of the many locations where Rogue One will take place.

They’re certainly all in a rush to get somewhere, and it looks like they’re running out of an old building. Perhaps they’ve established a rebel base in some ancient temple ruins somewhere, in the same tropical location of the Rebel Soldier above?

Bistan is part of the Alliance, and was instrumental in stealing the Death Star plans. He’s an Iakaru, a species we don’t know a lot about at the moment, but it certainly looks like he’s a key part of the Alliance if he’s trusted with such a serious duty.