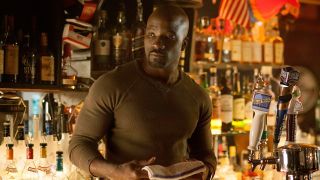 Aside from the brief teaser that premiered at the end of Daredevil's second season in mid-March, we haven't really seen all that much from Luke Cage. The solo series for Mike Colter's unbreakable hero will finally debut on Netflix on September, and a fresh batch of set photos (via Superhero Hype) have emerged online.

The photos show Colter's Cage facing off against Erik LaRay Harvey's Willis Stryker aka Diamondback. The two characters have a long history in the comics - they used to be good friends who worked for the same criminal organisation - and if the recently unveiled synopsis for the series is anything to go by it looks like the show will be following it quite closely.

I'm really excited to see this one; Cage got a great introduction to the MCU in Jessica Jones' first season, and now that at least some of the groundwork for the character has been laid it will be interesting to see how Cage develops in his own series.