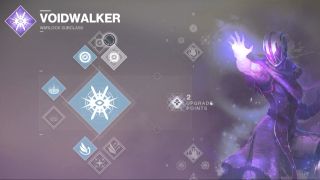 Destiny 2 has brought a few subtle changes to some very familiar systems, and one of these is a new set of Guardian classes and subclasses. Like getting a Sparrow in Destiny 2, unlocking everything is part of the game, but if you're impatient or just want to know what's going on, let me explain...

Your first Destiny 2 guardian class is a freebee

Obviously, you can't be a Guardian without some kind of class and you can get a an in depth breakdown of Warlock, Hunter and Titan classes in Destiny 2 here that should help you make a choice if you've not decided yet. (Warlock is the best, BTW.)

The starting classes are unlocked after the mission Spark and here's a quick run down of those:

The Warlock's Solar class is basically fire and wings, letting you hover and fling flaming projectiles at the ground. It has two new abilities that either buff you and your teammates' damage, or heals you.

Arcstriders, unsurprisingly are the Hunter's Arc class, and get a big electric stick to spin around the place vaporizing enemies with. You can also choose either a dodge that reloads your ammo, or your melee gauge.

Sentinel's void class starter gets a Captain America shield. It can deflect damage or you can frisbee it into faces and ricochet the enemy to death. The extra abilities here are two types of barrier - either a big protective one, or a smaller one that you can crouch behind to reload your guns.

How do I unlock Destiny 2's subclasses?

Short version: when Destiny 2 lets you. The two subsequent subclasses for each Guardian are locked to your level progress - the first opportunity appears around the level 8-10 mark, the second around level 14-15. The process for both is the same and involves finding a relic you can charge.

What does the subclass relic in Destiny 2 do?

I'm playing Warlock here but the process of getting and unlocking a relic is the same regardless of class. Around the 8-10 or 14-15 level mark you'll receive one in a drop. You'll need to charge it before you can use it, which is done by killing things, although Public Events appear to speed things up significantly.

When you charge it you'll receive this message: "Your lost strength is returning to you. Return to the Shard in EDZ and restore your Light."

Head to the Director and you can fast travel to the Shard of the Traveler where you originally regained your Light.

Once there you'll get a bit of a museum tour in the Dark Forest from some actual people ghosts, not your little floaty friend. Then, after that, you'll gain your new class and be inundated with enemies to test it on with unlimited Super energy.

Unlocking the second subclass involves repeating the same process of charging relics and killing loads of stuff. Here's what each class gets:

The Warlock's Void subclass gets grenade based attacks plus a large area of effect, and life force draining abilities.

It's old Johnny Electric Fingers for the Warlock's Arc subclass. This is a close up option all about unleashing lightning energy to fry crowds of enemies in one go.

This is the Hunter's void option and more of a support role as you slow or tether enemies with a magic bow.

The only choice for Titans that love to pound. The Titan's Arc subclass unleashes Arc damage and a lunging fist attack. No one's happy except the Titan.

The Titan's Solar subclass is all about splash damage, flinging flaming hammers all over the place.