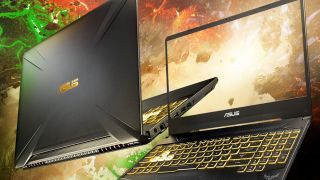 Cheap gaming laptops for under $1000 are semi-rare beasts, but - as shown below - they are to be found. And you won't have to compromise on performance, quality, or components as much as  you think. Given the value that they can offer, some really punch above their weight and give some of the very best gaming laptops a run for their money.

First, Amazon has an ASUS TUF gaming machine that is quite the attractive proposition for a gaming laptop under $1000. Inside the 15.6" machine is: a Ryzen 7 R7-3750H processor; 16GB of RAM; and a 256GB SSD and 1TB HDD storage combination. It can be yours for just just $999.49 - a healthy saving of $100. This really does cover the bases and offer a lot; it bucks the trend that budget gaming laptops have to cut corners on storage and RAM particularly.

However, if you only have eyes for an Intel-powered gaming laptop and don't mind compromising on storage a little - if you have that solved already externally, say - then this EVOO gaming laptop is a decent option from Walmart right now. In this one you get an i7-9750H processor, the same 1660Ti graphics card, and 16GB of RAM, but also just a 512GB SSD as the on-board storage in this 15-inch laptop. It's going for just $999 at Walmart (a reported saving of a massive $400).

These two cheap gaming laptops under $1000 that we've highlighted below genuinely do offer a great way into PC gaming that isn't ridiculously expensive, and will still have you comfortably enjoying the latest and great games at 1080p and at high settings. Particularly if you can bag a machine with the top of the '16' series Nvidia graphics cards. Like these two we've got for you today.

The ASUS TUF model is probably the one I'd go for if you pushed me off the fence, but they both great cheap gaming laptop deals in their own right, and it'll come down to personal preference, mainly on the brand and the storage front, that your decision will be made.

If you prefer your machines to be static, then check out the best gaming PCs going, and if you're in need of a bigger screen then one of the best gaming monitors will prove a great companion to your new laptop.