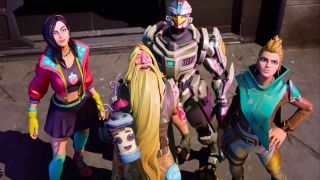 Fortnite season 10 is looming, and a recent leak might have just revealed the theme. Data miners have uncovered some images that reference high-ground and hovering, and show the female Commando skin using a jetpack. The posters are allegedly for the upcoming Fortnite Cattus monster event, and could mean jetpacks and a future war theme.

Reddit poster Smithstirini revealed the WW2-inspired posters and commenters fired up their speculation engines, suggesting that the Cattus event could set events in motion for an apocalypse-themed season 10.

"I assume the people of the map will probably fight the Polar Peak Monster," said DatFlareon14. "Two of the posters make reference to taking cover, which was spread in the height of the Cold War. I imagine a missile or nuke will probably be launched. Leading to Season 10 (Apocalypse Theme anyone?)"

Current estimates for the start of season 10, based on previous timings, have it starting around July 18. At the same time, a PS4 listing for Fortnite Season 9 had it running until August 1. Developers on the game have just started two weeks of (well-earned) mandatory vacation so that could also affect any big planned events.

Whatever the posters turn out to be referring to, it looks like the next season will have some surprises in store.