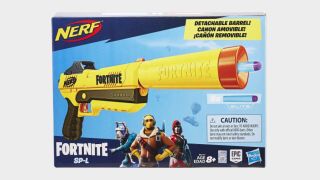 Ordinarily, hearing 'Fortnite' and 'nerf' in the same sentence is a recipe for disaster. But this isn't going to be a Drum Gun-style downgrade. Far from it. The Fortnite Nerf Elite Dart Blaster, which is modelled after the in-game pistol, has been given a sharp discount as part of the vast array of Amazon Prime Day game deals. It's only $11.68. That's 42% off, but be quick: You've only got until the end of Tuesday, July 16 to get your hands on it. Why not add a few to your cart and make a game of it this weekend while the weather's nice?

Worried you're going to take the L in a Nerf war? Don't be. Not only do you get six Nerf darts included in the price, you also have a three-dart chamber, which means you can rapid-fire at your targets. Again, the price has tumbled: What was once $16.69 is now just over $11. For something that's officially Fortnite, and not an Epic-themed knock-off, that's a great day, whichever way you look at it.

But it wouldn't be a great piece of Fortnite merch without some wicked-cool customisation, would it? As luck would have it, the Elite Dart Blaster comes with a detachable barrel so, if you want to swap out the bright yellow for something a little more muted, then you're free to do so at any time.