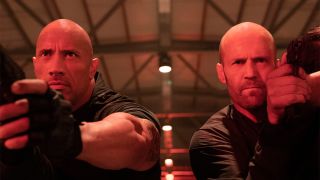 The Fast franchise is expanding in 2019, with its first official spin-off movie. Dwayne Johnson’s Luke Hobbs and Jason Statham’s Owen Shaw buddying up for a team up movie that’s set after the events of The Fate of the Furious (Fast & Furious 8 to UK audiences).

In the anticipated action thriller, the duo will face off against Idris Elba’s mysterious villain Brixton, and they’ll have support from Vanessa Kirby (Mission: Impossible – Fallout) as Owen’s sister, Hattie Shaw. Director David Leitch (Atomic Blonde, Deadpool 2) is calling the shots on this spin-off.

Plot details are being kept under wraps for now, but Leitch did give Total Film an idea of what to expect in an interview with TF for their 2019 preview issue, which is on sale now. “We’re going to go on an exciting ride with these two beloved characters of the franchise who were always at odds,” Leitch tells TF. “I think of the classics like Lethal Weapon or 48 Hrs, or some of these ’80s and ’90s buddy-cop comedies – that dynamic was fostered in the original [Fast] franchise, we’re going to take it and expand the whole world around it.”

The most anticipated upcoming movies of 2019 and beyond

Leitch – an action expert given his stunt design background – also teases a tone that will be in keeping with the previous Fast films, while carving out a space of its own. “We wanted to make sure that we can make a movie that sat comfortably in the Fast world, but was distinctly its own,” says Leitch. “And I think we’re on the road to doing it… Our guys aren’t street racers. They’re from the agency world, and we’re building up their world so we can diversify the action and have fun in all different ways.”

Fast & Furious Presents: Hobbs & Shaw opens in the US and UK on August 2, and you can read more about it in the new issue of Total Film magazine, which is on shelves now, and features a huge 2019 preview, as well as a special Review of the Year supplement, celebrating 2018 in movies.

If you’re a fan of the mag, why not subscribe so that you never miss an issue throughout 2019? If you sign up, My Favourite Magazines will deliver every new issue through your letterbox before it hits shelves, and you’ll save money on the cover price. And, on TF's current subscription offer, you could get a Funko x Playmobil Marty McFly collectible and an ’80s bookazine free when you subscribe for as little as £17.50 (Ts and Cs apply). What are you waiting for?