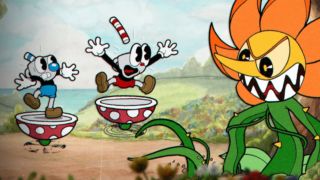 Cuphead is coming to Netflix!

The streaming service announced today (9 July) that a TV series, based on the popular (yet devilishly difficult) video game, is being developed in conjunction with King Features and Cuphead developer Studio MDHR. Titled The Cuphead Show!, the comedy series will expand on the world first shown in the independently produced video game.

“The character-driven comedy follows the unique misadventures of the impulsive Cuphead and his cautious but easily swayed brother Mugman,” the official press release reads. “Through their many misadventures across their surreal home of the Inkwell Isles, they’ve always got one another’s backs.

Cuphead, which centres on the eponymous hero and his brother Mugman after they gamble away their souls to the devil, sold 4 million around the world and won awards at both the 2017 Game Awards and BAFTA Games Awards. The game features hand-drawn animations inspired by cartoons from the 1930s, with the Netflix series presumably using similar animation techniques.

Cuphead creators Chad and Jared Moldenhauer will serve as executive producers on the Netflix series, with Carmen Sandiego acting as executive producer for King Features - the company that also owns the rights to Popeye, Garfield and Archie. Netflix Animation will produce the series.

As well as Cuphead, Netflix also has a TV series adaptation of The Witcher on the way, with Henry Cavill playing the show's main character Geralt. Find out more about The Witcher Netflix series here.