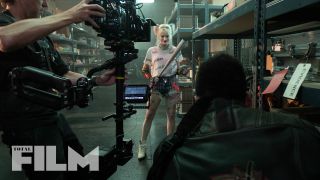 Harley Quinn's looking for emancipation, and in doing so finds herself at a crossroads: to become a straight-out villain, or be the anti-hero Gotham deserves. In Birds of Prey, according to actress Margot Robbie, she's "doing the right thing".

“I think Harley borders on a villain and an antihero," she tells our sister publication Total Film magazine for the latest cover. "In darker depictions, she could be playing for the darker side and be a more straight-up villain. In this film, she’s kind of doing the right thing, ultimately. But she's not a moral person. So I consider her more antihero."

Director Cathy Yann was also on hand to discuss Birds of Prey, revealing that this will no be the same Harley we saw in Suicide Squad. "It's a really big sandbox to play in," she says of DC's superhero universe. "I was given an opportunity to do something that was quite different, and wasn't a sequel in any way."

Robbie, Yan and the cast speak in detail about the movie with Total Film magazine for the latest issue’s cover feature. The new issue hits shelves on December 20. Birds of Prey opens in cinemas on February 7.