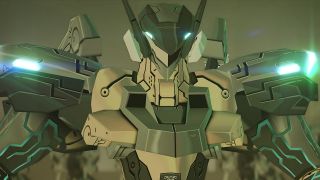 You probably know Hideo Kojima for his work on the Metal Gear Solid series - but way back in 2001, he helped produce the PS2 mech combat game Zone of the Enders. The sequel to this cult classic, Z.O.E. The Second Runner (2003), is coming to PS4 and PC on September 6th with visuals remastered for 4K resolution, new audio design, a VR mode, and a fancy new title:

Zone of the Enders: The 2nd Runner - Mars.

The Z.O.E. 2 remake adds a new 'Pro Mode', allowing faster set up of sub-weapons, and a 'Very Easy' mode for those who want to enjoy the experience in VR – imagine a high-speed Pacific Rim in first-person. The VR additions include a 3D Hangar, a 3D model viewer and a cinematic theatre. PS4 digital copies come with a 'Welcome to Mars' dynamic theme and Z.O.E. avatars. You can pre-order Z.O.E. The Second Runner right now on PS4, PS VR and Steam for £24.99.

If you've never heard of the Z.O.E. series before now, here's an interesting fact: back in 2001 the original Z.O.E. was one of the most returned PS2 titles of all time. Not that it's a bad game - with a 78% rating on Metacritic - but because it came bundled with a demo disc for the highly-anticipated Metal Gear Solid 2: Sons of Liberty. A huge number of people bought Z.O.E. for the MGS2 demo, then traded the game in. Z.O.E. received one sequel, a Game Boy Advance spin-off, and a limited anime series.

It was also ported to the PS3 and Xbox 360 in the Zone of the Enders HD Collection, but this version was poorly-received due to performance and visual issues. In fact, reception to the HD Collection was so mixed that plans for a third entry - which would have been rendered in Konami's Fox Engine - were shelved by Hideo Kojima back in 2013.

In itself, Z.O.E. The Second Runner is an interesting curio, that we look forward to playing in VR and 4K at the E3 games show in June. The more interesting portent is that Konami are showing a willingness to remaster Hideo Kojima's back catalogue… and news of a Metal Gear Solid 3: Snake Eater remake in 4K might raise a few more eyebrows.

Thinking of making the leap to virtual reality on PS4? Don't miss our guide to the best PlayStation VR bundle deals.