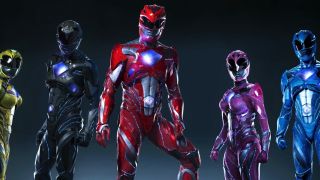 We've not even seen its first attempt and already Lionsgate is turning its eye to more Power Rangers movies. Based on early artwork, set photos and official pics, responses to next year's movie are mixed, to say the least. That's not dampened anyone's spirits over at the studio, however.

"We are really, really excited about the Power Rangers movie," CEO Jon Feltheimer said today on a conference call, "We could see doing five or six or seven." Them's some mighty big words. The CEO goes on to say that these tentative plans are a result of positive responses to the Power Rangers' recently unveiled new costumes. According to Variety, Feltheimer called them "evidence of audience interest."

Initial reactions to Rita Repulsa's revised look haven't been that positive. Elizabeth Banks is barely recognisable under the costume which shares little resemblance to the character's previously onscreen appearances. Despite first impressions, it's impossible to gauge what the movie will be like until it's released. We won't know until then whether or not we'll even get one sequel, nevermind several. Here's hoping we get a glimpse at the action soon in a teaser trailer.

Directed by Dean Israelite and starring Naomi Scott, Dacre Montgomery, RJ Cyler, Ludi Lin, and Elizabeth Banks, the Power Rangers movie will be released in UK and US cinemas on January 13, 2017.