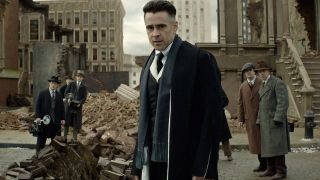 Matt Reeves has taken to using Twitter to announce casting news of major characters in his upcoming adaptation of The Batman, the director posting GIFs of actors with intentionally coy captions.

The latest seemingly confirms that Colin Farrell will be playing another foe of the Dark Knight, The Penguin. Rumors of the casting first circulated in November, but now it's official.

Reeves' tweet shows Farrell shrugging his shoulders in a befuddled state, accompanied by a caption reading, "Wait – is that you, #Oz?" Oz references Penguin's real name, Oswald Cobblepot. It isn't quite as direct as Reeves' other Twitter announcements, but it's hard to interpret the tweet as anything other than Farrell as Penguin.

The Dark Knight has a lot on his hands in The Batman, with Farrell's Penguin joining Paul Dano's The Riddler, and Zoe Kravitz' Catwoman as villains. Robert Pattinson, who leads the cast as The Batman's titular hero, recently told The New York Times that his Batman is far from an archetypal comic book movie hero, describing him as a "complicated character" whose "morality is a bit off."

The Batman won't hit theaters until June 15, 2021, but there are plenty of big movie release dates coming in 2020.