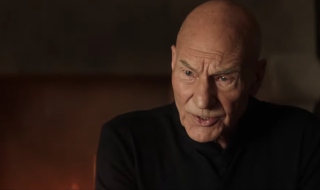 The Star Trek Picard series trailer is here! Thanks to the franchise's big panel as part of the San Diego Comic Con 2019 schedule on Saturday, we've got a first look at the best Star Trek captain's return (don't @ me) and realease window for the Picard TV show.

Returning to the captain's chair for the first time in 17 years, Patrick Stewart will once again play Jean-Luc Picard. However, he's a very different man than the one was saw in The Next Generation. It's time to go where to go where no fan has gone before: watch the Star Trek Picard trailer below.

The trailer opens with an unnamed woman asking Picard if he's "ever been a stranger to [himself]." His response? "Many, many times." We then get a shot of a dismembered body of Data. This is going to some seriously dark places.

Much of the trailer revolves around a woman in danger who's approaching Picard looking for refuge and help. The good captain, though, seems to know who she is, and believes she's in "serious danger."

Some familiar faces from The Final Frontier also crop up in the Picard trailer. Seven of Nine, Data, and the Borg are all present, which is very exciting for long-time Trekkies. The series will launch early 2020, so you have time to go back and revisit those old The Next Generation boxsets.

The Star Trek panel was not all about Picard, though. We were also treated to some new information regarding the forthcoming third season of Star Trek Discovery, which you can read all about here.

For more clips from SDCC 2019, be sure to check out our San Diego Comic Con 2019 trailers hub.