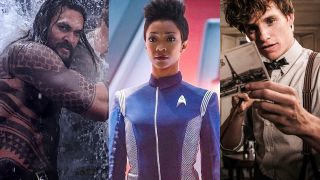 Busy weekend? Don't worry if you missed most of San Diego Comic Con 2018 because you can catch up on EVERY Comic Con trailer released right here. Whether you want to rewatch that incredible first Aquaman trailer, take another look at The Walking Dead's upcoming season, or you just want to make sure you haven't missed a new trailer for your favorite show, we've got them all below. Sadly, some of the trailers are geo-locked to the US, so we've also added links to the UK trailers where possible - but what about the exclusive Hall H footage, which isn't released to public? Don't worry because we've written that up too and added it below. Keep scrolling to watch every San Diego Comic Con trailer released this year.

At long last, we’ve finally got our first proper glimpse at James Wan’s Aquaman and boy it does not disappoint. Taking us back to Arthur Curry as a youngster to the moment he realises what he’s destined for, this looks like the movie that could put the DC Extended Universe back on the map.

Finally, a touch of genuine humour appears to be taking place in Warner Bros’ DC universe. Our first look at Shazam! highlights the film’s amusing Big-esque premise, as the young Billy Batson figures out how to transform from his typical teenage self into the spandexed adult superhero, played by Zachary Levi.

Godzilla: King of the Monsters

In case the 2014 Godzilla didn’t quite make this point, Charles Dance does in the first trailer for its sequel, Godzilla: King of the Monsters. This scaly beast is the KING. But if he’s the king, what the hell are the rest of the beasts he’s destined to tussle with? To be honest, that doesn’t even seem to be the biggest question I have after watching this trailer. That would be: err, so the world’s survival depends on scheduling a kaiju playdate?

Fantastic Beasts: The Crimes of Grindelwald

Fantastic Beasts: The Crimes of Grindelwald  may sound like some *epic* Potter fanfic, but it’s actually the sequel to last year’s spin-off, Fantastic Beasts and Where to Find Them. This deep dive trailer gives us a glimpse at what’s next for Eddie Redmayne’s Newt Scamander in the Wizarding World. As expected we’re shown a smattering of flashback scenes signaling the young Newt’s first dalliances with magic and Jude Law as the very dapper and youthful Albus Dumbledore.

The first trailer for Glass shows Split's Kevin Wendell Crumb and Unbreakable's David Dunn and Mr Glass being questioned by psychiatrist Dr Ellie Staple (played by Sarah Paulson), who considers them to be delusional. Prepare for the return of The Beast, and to see how Dunn's super powers help when he has to take him on. "A lot of people are going to die," says Mr Glass, ominously. "Are you ready?"

Even long time viewers weren't too excited about The Walking Dead season 9 after last season... that is until it dropped one hell of a Comic Con trailer! With the war now (mostly) behind them, Rick and co. seem to thriving and building a new world... until some sort of civil war kicks off between the different settlements. Oh, and did you notice the tease for the season's 'big baddies' The Whisperers at the end?

Watch The Walking Dead trailer in the UK here.

Star Trek Discovery season 1 was a wild ride, boldly going where the franchise had never gone before, and season 2 looks to continue that streak with a flashy and exciting Comic Con trailer. As well as teasing the main plot for season 2 - what are those signals about? - it looks like the second season will bring in some familiar Star Trek faces, including the one and only Spock. As Captain Pike says, hit it!

After years of silence and a vague not-quite-cliffhanger ending to season 6, it looks like the animated Star Wars: The Clone Wars series will get a proper send-off after all. This surprise Comic Con trailer gives fan a tease of what's in store: epic-scale battles, clone trooper squad drama, and the return of Ahsoka Tano, apprentice to Anakin Skywalker.

We've waited a long time to get our first proper look at the new Doctor and while this teaser may be short, it's definitely maintained our hype levels as Jodie Whittaker's Doctor asks Graham, Ryan, and Yasmin to be her new BFFs. Awwww. The teaser promises "new faces, new worlds, new times" and features some pretty beautiful landscapes in its 40 seconds as well.

Watch the Fear the Walking Dead trailer in the UK here.