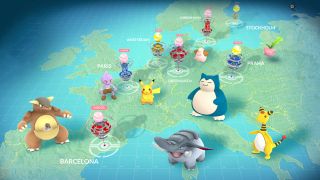 So maybe you aren’t planning on travelling any time soon but your friend has just got back from a round the world trip. The excellent news is that you can absolutely trade regional exclusive Pokemon in Pokemon Go. Here’s how much stardust each trade will cost.

Of course, this does depend on your friendship level to add each others friend codes and share that first gift. As you can see, it absolutely pays to be Ultra or Best friends so holding onto the Pokemon a little longer and building your friendship will definitely save you some stardust.

Before we get into the specifics, it’s worth noting that regional exclusives in Pokemon Go can arrive on lures and incense, so if you are only going to be in one place and can’t keep an eye on your ‘nearby’ options, consider cracking one or both of these to maximise your chances.

As ever, to increase your chances of catching without anything fleeing, use Razz Berries and Golden Razz Berries, and make sure you are using curveballs and aiming for the smallest possible bullseye. Your Pokedex will thank you.

Gen 1: How to catch Tauros, Mr Mime, Kangaskhan, and Farfetch’d in Pokemon Go

Gen 2: How to catch Heracross and Corsola in Pokemon Go