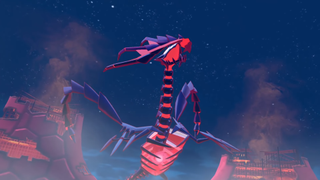 Note: there's very minor spoilers in this guide, so if you're wondering how to catch Zacian, Zamazenta, and Eternatus, check out the final few pages of our Pokemon Sword and Shield walkthrough.

Zacian is the cover Pokemon for Pokemon Sword, and you'll first encounter this mysterious beast when you search for Wooloo in the Slumbering Weald. You can only catch Zacian in Pokemon Sword – Pokemon Shield players should read on to the next entry – but you'll have to wait until your next encounter with the legendary 'mon near the end of the game until you can try and catch it.

Zacian is a Fairy/Steel-type and will be level 70 when you can catch it, then make sure you head back to the Slumbering Weald at the end of the game and grab the Rusted Sword to upgrade it to its more powerful Crowned Sword form.

Hero of Many Battles
Sword: Known as a legendary hero, this Pokémon absorbs metal particles, transforming them into a weapon it uses to battle.
Shield: This Pokémon has slumbered for many years. Some say it's Zamazenta's elder sister—others say the two Pokémon are rivals.

Crowned Sword
Sword: Now armed with a weapon it used in ancient times, this Pokémon needs only a single strike to fell even Gigantamax Pokémon.
Shield: Able to cut down anything with a single strike, it became known as the Fairy King's Sword, and it inspired awe in friend and foe alike.

Much like Zacian in Pokemon Sword, Zamazenta is the cover legendary and face of Pokemon Shield. Again, you'll run into it alongside Zacian in the Slumbering Weald at the start of the game, but you can't catch the beast until you face it again shortly after you become Champion of Galar.

While Zacian is Fairy/Steel-type, Zamazenta is Fighting/Steel-type and again, will be level 70 when you fight and catch it. Venture back to the Slumbering Weald and obtain the Rusted Shield to upgrade Zamazenta to the Crowned Shield form.

Hero of Many Battles
Sword: In times past, it worked together with a king of the people to save the Galar region. It absorbs metal that it then uses in battle.
Shield: This Pokémon slept for aeons while in the form of a statue. It was asleep for so long, people forgot that it ever existed.

Crowned Shield
Sword: Its ability to deflect any attack led to it being known as the Fighting Master's Shield. It was feared and respected by all.
Shield: Now that it's equipped with its shield, it can shrug off impressive blows, including the attacks of Dynamax Pokémon.

Eternatus is the legendary Pokemon teased throughout the game, but rarely named until you face off against the enormous 'mon prior to taking on Leon in the final. It's the tallest Pokemon ever known to exist in the Pokemon universe, and is the source of the Dynamax/Gigantamax ability being present in Galar.

When you take on Eternatus at the top of the Energy Plant before the end of the game, you'll need to defeat it in a raid battle style fight. Zacian and Zamazenta will come to assist you, and capturing it will reward you with the insanely powerful beast at level 60. After winning the fight, you can then use Eternatus to help you become Champion in the final. Cheeky.

Eternatus
Sword: The core on its chest absorbs energy emanating from the lands of the Galar region. This energy is what allows Eternatus to stay active.
Shield: It was inside a meteorite that fell 20,000 years ago. There seems to be a connection between this Pokémon and the Dynamax phenomenon.

Eternamax Eternatus
Sword: As a result of Rose's meddling, Eternatus absorbed all the energy in the Galar region. It's now in a state of power overload.
Shield: Infinite amounts of energy pour from this Pokémon's enlarged core, warping the surrounding space-time.