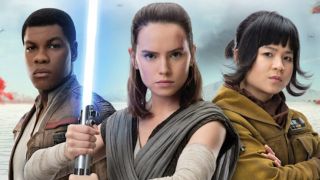 At this year's Star Wars Celebration in Orlando we learned of a new addition to a galaxy far, far away: a Rebel maintenance worker named Rose. The character is set to debut in Star Wars: The Last Jedi and today brings a new look at her on the cover of an upcoming tie-in book.

While details on her role remain scant, we do know that she'll have, according to director Rian Johnson, "the biggest new part in the new movie." He went on to explain that “she’s not a soldier. She’s not looking to be a hero, and she gets pulled a very big way into an adventure in this movie with Finn [John Boyega].”

Taking that into consideration, the fact that she shares equal space with two leads - Rey and Finn - on this cover make sense. It could be that her involvement in the plot is paramount to their mission, and possessing maintenance knowledge would prove incredibly useful.

For totally legal things I mean - like breaking and entering. Double that with the book title "Heroes of the Galaxy" and you've got.... well, either a massive spoiler about Rose's fate or a Guardians of the Galaxy mockbuster.

You can check out the full cover over at StarWars.com along with a gallery of other titles announced today.