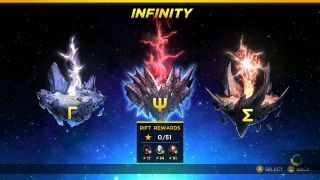 There are eight Marvel Ultimate Alliance 3 Secret Rifts in the game for players to find and you'll have to pick them up to fully flesh out the Infinity Trial rifts, so they’re well worth looking out for. In this Marvel Ultimate Alliance 3 guide I’m going to list the level and subsequent checkpoint you need to head to in order to find them. Most of them are quite easy, but if you get wrapped up in the chaotic combat you’re likely to miss at least a few of them!

From the Central Courtyard checkpoint after you turn Sandman into putty (where you first get some room to breathe) talk to your fellow superheroes and then walk towards the objective. You should get a message through from Nick Fury about S.H.I.E.L.D scanners going wild. Instead of heading through the metal door to progress, go through the alley to your right, and you will find a yellow rift to unlock which is an Ability Trial where you have to beat Nebula from Chapter 1, albeit with reduced attack damage.

From the first checkpoint in Shadowland progress through the legions of enemies and the annoying stealth section, then speak to Jessica Jones to unlock a path through to the temple area - just don’t cross the bridge to find Iron Fist just yet. Instead, head over to the right instead and you will find a number of flying enemies and a mini temple. Nick Fury will give you a call to talk about power fluctuations - just press on to the far right and you should see a yellow rift in front of you. Access it to unlock a difficult Synergy Trial where you fight Doctor Octopus.

This one is truly hard to miss, especially if you’re on the lookout for rifts. Right at the start of the mission once you activate the first computer and wipe out the Ultron robots, you’ll talk to Vision and open up a door out of the lab. Instead of heading right like you’re supposed to, listen to Nick Fury and look to your left, and down that corridor, there will be a blue rift you can access to unlock a new infinity trial that has you fighting 200 enemies in the Kree ship.

Once you’ve defeated the first set of sentinels, you’ll have a moment to breathe at the Xavier Institute gates. Your next objective should be to ‘meet beast behind the mansion’ so head around the garden area, face off against two blue sentinels and press forward until you’re supposed to head right. Instead of doing that go left and you’ll hear Nick Fury start rambling on about anomalies again. Follow his lead for another secret rift - this time a yellow Survival mission where you have to take down Elektra whilst your HP is dropping.

Another super easy one. Once you find and help Elsa Bloodstone beat those awful mud demons - talk to her and she’ll unlock a rift you can hop into to access the next area. Keep it moving and Nick Fury will bang your line about something unusual in that region. Before heading up the ramp towards the next part of the map, take the side route left and you’ll find a red rift. Access it to unlock a Rush mission where you have to beat 40 enemies on the raft.

6. Wakanda - Edge of the Jungle

Right at the start of the mission, progress until you get to the first crossroads on your minimap after fighting through an open area. You’ll see a ledge and an enemy on your right which is the right way to go - but instead, look left and you should see a red rift ready to be unlocked. Access it and you will pick up the Ultimate mission ‘Kree Justice’ which has you fighting Ronan and a selection of other nasty villains.

After you take the alternate route into the palace following your fight through the gates protected by HYDRA - you will come to another checkpoint. Head down into the next part of the level and you will be ushered left by the enemies. Ignore this instinct and head right to get another phone call from Nick and see a nice blue rift ready to be unlocked. Interact with it to unlock the Boss Wave mission ‘Defeat Nebula & 2 Bosses’ which has you facing off against Nebula, Ronan and Kingpin in quick succession.

The final secret rift is found in the last level but it also might be the most simple to see. Once you help Cosmo clear out the bad guys - ascend the hyper lift to find another Shield point and you’ll see the red rift just behind you and to your left - of course, you’ll also receive a call from Nick Fury to let you know its there. Access it to unlock the Ultimate ‘Big Trouble’ mission where you fight off against Sandman and a host of baddies.