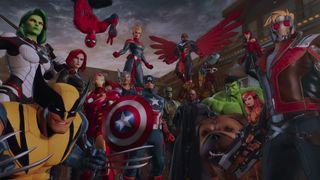 I thought I’d start with this Marvel Ultimate Alliance 3 tip given that you could run through the whole game and have no idea. Marvel Ultimate Alliance 3 has a special camera mode for solo players which makes the experience much more enjoyable. It took three chapters for me to realise, so this is me paying it forward for all the lone wolves out there. Head to the options menu under ‘System’ and switch it on so you can click the right stick to lock onto enemies for greater precision when you want to focus on an enemy to stagger amidst the chaos. It might be a little too hectic to keep on during multiplayer, but it’s worth checking out just to see a different side to the game - the narrow lens means you get a better look at the details too.

Another Marvel Ultimate Alliance 3 tip that we should probably get out of the way sooner rather than later - you really should check out the tips menu in this game as soon as you pass the tutorial. There’s a lot in the game that isn’t explicitly explained - or at the very least, isn’t explained well enough in the short tutorial. The ‘Tips’ section is in the System menu and will give you a more detailed overview of the complex systems in the game like ability styles, ISO shards and how to perform Synergy and Extreme attacks. It took me an hour or so to figure out that ZR is for Synergy whereas the normal ‘R’ button is held for casting abilities without teaming up. Lots of incredibly useful info in there, so don’t miss it.

Level up via infinity trials

This Marvel Ultimate Alliance 3 tip goes out to everybody, but especially solo players - you should take part in the Infinity Trials as soon as possible. Once unlocked the rift grids will afford you tons of useful resources and most importantly - lots of XP to help you fight with efficiency as you push through the campaign chapters. If you keep going without taking a break for some grinding, you’ll likely fall off eventually, and the Infinity Trials are genuinely a lot of fun regardless and really switch up the highlights of previous missions. As well as cool costumes, you’ll also pick up extra shards and orbs to help level up your team and fine-tune their abilities - there also might be some unlockable characters in it for you.

It’s easy to get lost in the chaos of The Black Order’s hectic combat but always assess your environment. In every chapter, the game likes to introduce some kind of projectile explosive that you’d be a fool to ignore. A good Marvel Ultimate Alliance 3 tip is to keep watch of what's around you - picking up a rocket or an explosive canister to lob at a formidable foe can completely change the tide of battle. Some enemies in the late game will also only take damage from certain thrown items, so its good to get used to mixing them in with your punches, kicks and abilities at the earliest convenience.

As soon as you put together your first team, you’ll notice on the Hero Select screen that there are stats in the top right that correspond to the main core stats in the game - Vitality, Mastery, Resilience and so on. You can give your team a sizable advantage by curating superheroes of similar tastes and affiliations. For example - every new character in Ultimate Alliance 3 gets a bonus - so do characters who sling webs and those who make wisecracks on a regular basis. A good Marvel Ultimate Alliance 3 tip then is to study the entire list by hitting Y on the Hero Select screen. The game will then show you the bonuses you have active and the potential allegiances you can make with your favourite characters. It’s a pretty flexible system, especially if you’re not dead set on certain characters, so make use of it!

During the tutorial, you’ll no doubt come across glimmering orange boxes that are spread throughout the game - when broken they offer up a scarce resource, some concept art or an ISO shard and you should always take the time to smash them when you spot them. This is because they can give you essential materials for levelling up and adding enhancements. Whilst there are a number of orange boxes out in the open, there are also others that are hidden behind locked doors, paintings and walls that emit the same kind of glow. To get past these you have to approach them and look at the two symbols - you basically need to perform a synergy attack that utilizes both of those ability styles and you can gain access. You can always swap characters if you need a certain skill.

Don’t be stubborn about superheroes

Despite the fact that Marvel Ultimate Alliance 3 frontloads its roster in the first few hours - meaning that a lot of iconic characters are low-level and you need to put in work to flesh them out  - you should certainly do your best to fight against that and swap between heroes regularly. At the very least consider characters as and when they’re introduced in the story, as they will be relatively close to your level already and easy to slot into your team. Whilst there are certain ‘types’ of superheroes in the game, everyone is unique, so take this Marvel Ultimate Alliance 3 tip and don’t miss out on the ones you’re interested in at the very least!

Save your XP cubes

Throughout Marvel Ultimate Alliance 3, you’ll pick up different levels of ‘XP Cubes’ which are essentially Pokemon’s Rare Candies for superheroes. I’d argue that you should hold onto these instead of using them on the characters already within your team. For starters, they make much more of a difference to lower-level heroes. Even massive XP cubes will only buff a level or two on a level 25-35 character. Let the folks in your team level up via battle first and foremost, and keep your XP cubes for when you want to swap out a hero for another and quickly get them up to speed - there’s nothing worse than trying to make Iron Man work when you’ve never used him so he’s still sub-level 10 when you’re halfway through the game. Hold onto your cubes!

There are pretty much three types of enemy in Marvel Ultimate Alliance 3 - you’ve got your run of the mill grunts that take a few punches to down, fully-fledged bosses with giant health bars and your mid-tier foes who have a purple bar below their health bar. You can stagger these guys by depleting that bar, which when combined with an ability/synergy attack will lead to a stun. Figuring out this wombo combo is crucial to combat success in Marvel Ultimate Alliance 3. Don’t ignore grunts entirely (especially if they’re the kind that throw dangerous projectiles) - but realistically you want to focus on enemies you can stagger to stop them steamrolling your team. Managing these foes and keeping the combat field clear so you don’t get stunlocked is a crucial Marvel Ultimate Alliance 3 tip if you want to get through some of the more difficult battles in The Black Order.

The game does teach you how to dodge and block right at the start - tap L to dash in any given direction and hold down the same button to block damage entirely. My Marvel Ultimate Alliance 3 tip here is that you should never forget about these buttons, despite how fast-paced the game is. You can probably get through the campaign with relative ease without holding down to block - this often feels counterintuitive given the speed of combat. However, dashing is so important, especially when so many enemies have consecutive combos that push characters in a direction and take them out of ability animations. Especially when you’re playing as characters with low agility, you want to be dashing frequently, almost like Dark Souls - dash through attacks to survive them and get the jump on enemies from behind.

Study the style and direction of your abilities

Given that each character is unique in Marvel Ultimate Alliance 3 - you really want to study their abilities if you plan on letting them join your team. For a start, consult the tips guide as mentioned at the start of this article to see the different types of damage you can deal and what energy certain abilities conduct. Often they combine a few styles so make sure you know what you’re putting out there before you hit the corresponding button. Once you’ve got that figured out - start thinking about how abilities are cast. Spider-Man’s web-shooters shoot forward from where he’s standing and force him to stay static whilst doing so. It’s very easy to mess the direction up and waste your energy - or worse, use it in the middle of combat and be knocked out of the animation entirely. Position yourself from afar to use it and make sure you’re pointing in the right direction. That was just an example, but it’s worth thinking about this process every time you try out a new ability.