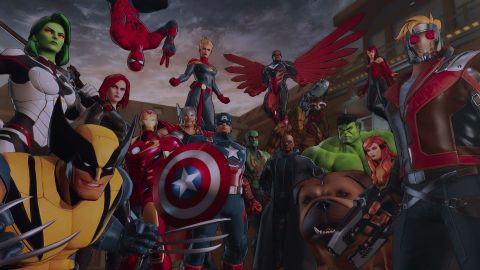 A mighty multiplayer brawler brimming with content, and carefully crafted characters that will delight both comic book veterans and MCU fanatics.

Indulge me and cast your mind back to 2006. Raven Software released the original Marvel Ultimate Alliance to a pre-iPhone world. Nobody knew what a streaming service was, and the Marvel Cinematic Universe was a mere twinkle in an executive’s eye, not a Disney-owned media juggernaut, raking in nearly $3 billion at the box office with its latest superhero get together - Avengers: Endgame.

Marvel is such an ingrained part of pop culture now that we have the term ‘Superhero Fatigue’ for apathy caused by overexposure to the comic book companies’ blockbusters. This is why after a 2009 sequel and ten years of hiding, Marvel Ultimate Alliance has made its triumphant return with a mountain of new material for Team Ninja to work with - and some fortunate cinematic zeitgeist.

Let’s get the basic premise out of the way: the hallmarks of Ultimate Alliance have always been simplistic, satisfying controls, four-player co-op and a remarkable roster of superheroes. Marvel Ultimate Alliance 3: The Black Order takes this successful framework and runs with it - especially when it comes to playable characters. There are a whopping 36 superheroes to pick and choose from when you’re trying to create a complementary team - most of which are thoughtfully introduced and unlocked throughout the game’s narrative.

Watch our video review below:

Clearly the roster has been curated to please modern movie-going Marvel fans - each Guardian of the Galaxy, nearly all of the Avengers, Deadpool and three characters from the Spider-Verse make the cut, but only the most essential X-Men make it in there, and the Fantastic Four must have been on vacation when Thanos and his goons started hunting the Infinity Stones.

Yes - the story also leans on where the Marvel Cinematic Universe is at right now. Obviously, all of that is rooted in the comics regardless, but you can tell that the team wanted to use the storylines that would be fresh in the minds of fans. Whilst most chapters invoke more fringe characters and villains that make the story feel original, you still have to quell an Ultron insurrection and fight Surtur on the Rainbow Bridge - sadly without Immigrant Song playing in the background this time.

As well as providing an unprecedented amount of superheroes, Marvel Ultimate Alliance 3 also offers up The Avengers of voice acting talent - Yuri Lowenthal and Nadji Jeter reprise their critically-lauded roles as Peter Parker and Miles Morales from Spider-Man PS4 (which is made even more of a cathartic homage when you’re fighting the Green Goblin outside of The Raft in an early mission.)

Steve Blum embodies Venom, Allegra Clark works her magic as Spider-Gwen and Nolan North nails both Deadpool and Rocket Raccoon. The delivery and back and forth between the heroes is an important part of The Black Order - which is why I’m pleased to say it is consistently satisfying and often chuckle-worthy - a lot of care has been given to recreate these characters who are so important to Marvel’s global network of fans. A suite of fluidly animated comic book cutscenes makes the cut alongside a number of fantastic character moments and cheesy one-liners, some of which are far too good to spoil.

The more milquetoast villains do border on trite at times (there is an unironic “You haven’t heard the last of me!”) and like many Marvel movies the starting throes of the third act of Marvel Alliance 3 is where the game starts to wane - mostly thanks to environments lacking in variety and some far-flung character choices that don’t really stick the landing.

Luckily this small period of sloggy filler is quickly washed away by the adrenaline-pumping gauntlet finale - a fantastic few hours that round off the campaign in cinematic style, complemented by a rousing score. It’s got its twists and turns - just don’t expect any waterworks, as Marvel Ultimate Alliance 3 really doesn’t take itself too seriously and likes to indulge some of the more silly superheroes than those stoic smoulder-boys on the silver screen. Outside of the camaraderie, the back and forth between heroes and villains feels very ‘Anime’ - which will either spark joy or anathema depending on your disposition.

Synergy, between you and me

Some nice object puzzles supplement the gameplay loop in Marvel Ultimate Alliance - which is where you deal with waves upon waves of grunt enemies with your superhero moves. One of my favourite parts of the combat is using the Synergy skills, which involves making a vicious, peanut butter and chocolate style mashup of two alliance member’s abilities to decimate a group of enemies.

The haptic feedback from this is always a rush - one of my favourites being The Hulk’s body-slam coinciding with Miles Morales’ electric floor webbing, which almost always resulted in a satisfying stun. Black Panther also boasts a brilliant skill known as Bast’s Fury where he makes the Wakanda Forever gesture and absorbs and reflects nuclear damage, which is devastating when combined with a vortex. These skills are often moulded into some of the game’s secret puzzles, which is a small stroke of genius.

There are also a number of inspired boss battles that consistently involve a clever design obstacle or conceit concerning the villain I was walloping, from Mysterio’s mist to Doc Ock’s tentacles, the game always made a spectacle out of its villains when you finally got the chance to best them. These would always arrive near the end of a contained chapter, which allowed for consistently great pacing across the campaign outside of a few teensy hiccups. Yet, I was often left dying for a moment to breathe and enjoy the cute idle animations and detailed environments  - the lack of hub world means you’re always pressing on at an often blistering pace in Marvel Ultimate Alliance 3. As penance, the game does plonk various heroes in between battles for idle chit-chat, but they felt disconnected from the story at large and mostly there for the sake of it.

Combat can get hectic which is almost always great fun, but it can lead to some negligible slowdown. Far worse though is the clumsy camera which sometimes betrays the flow of battle, leaving you stuck in a corner or firing out expensive abilities in the wrong direction. This and the fact you can’t neatly chain abilities in mid-air or during a button combo were the two noticeable problems holding back Marvel Ultimate Alliance 3’s combat from being completely watertight.

Playing the game mostly solo with a few multiplayer sessions in the midst, I soon realised that Marvel Ultimate Alliance 3 is no pushover difficulty-wise, and you actually have to think tactically about your hero composition if you want to succeed. Heroes receive buffs depending on their demeanour and allegiances - being a Spider-Fan I often indulged what the game calls the “Web Warriors”, as well as receiving bonuses for pairing the brainy and wisecracking characters together. Even with a few web slingers onside, my team was still incredibly versatile, which says a lot about the unique nature of each hero.

I would later go on to thoroughly enjoy Wasp, Deadpool, Nightcrawler and Elsa Bloodstone across my playthrough, though I think the way characters are introduced eventually makes swapping heroes quite off-putting. The game is front-loaded with superhero introductions, which means you’ve got a steady amount of iconic low-level characters to pick from very early. Yet once you find your favourites and make progress, it’s difficult to justify swapping out a level 28 Spider-Man for someone potentially more interesting when you’ve invested so much of your resources into him.

This means it's more attractive to swap newly introduced characters who start out at a level relative to your team. The fun tutorial mission started me out as the Guardians of the Galaxy, but I never really played as them again - I understand that ultimately it’s down to player choice, but perhaps by having missions where one hero is swapped in (depending on the location) so you’re forced to play as more of the roster would have made for a more versatile pool.

There’s a little bit of a balance issue if you’re planning to play solo, especially when it comes to Synergy attacks and their related Infinity Trials - more on those later. Essentially, the window to join in with the A.I is wafer-thin, and building meaningful energy across characters can be difficult, meaning you don’t feel as in sync as you would during a co-op match where you can communicate and coordinate attacks.

Though, I actually came to really enjoy the challenge of my playthrough thanks to the thorough progression system and the Infinity side-missions. This mode lets you relive the highlights of previous chapters in rift grids which boast unique unlockables and extra resources to help you bulk up if you’re struggling. The Infinity Trials are varied via a group of mission themes that slap a timer on or make certain damage types less effective - they’re always a worthwhile excursion from the campaign. This mode could really be its own game, and it’s definitely where I’ll be spending most of my time now that I’ve wrapped up the story content.

To meet the mark of the later Infinity Trials you have to ensure you’re levelling your characters properly - there’s a massive, Path of Exile-style Alliance Enhancements grid to work through and equippable modifiers in the ISO-8 shards that can help tune up your heroes to fit mission criteria or adapt to beat a boss. I’ll certainly be diving into some multiplayer on launch to grind these systems, fleshing out my beloved dream team with new costumes, skills and shards in chase of creating the true ultimate alliance. Until then, I’ve got nothing but praises to sing for Marvel Ultimate Alliance 3. Team Ninja has delivered a charming, reliable co-op juggernaut with a compelling license to back it up, one handled with care by the writers and voice actors behind the charming cast. Even if you’re just planning to play solo I can still heartily recommend Marvel Ultimate Alliance 3 - whilst it’s not absolutely squeaky clean it was very easy to see past the very minor gripes in service of the fantastic framework surrounding them.

Come for the crunchy combat and stay for the seductive systems that will keep you playing long after the compelling campaign has been conquered.

A mighty multiplayer brawler brimming with content, and carefully crafted characters that will delight both comic book veterans and MCU fanatics.