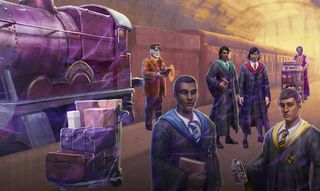 If you missed the recent Harry Potter: Wizards Unite Community Day, you'll be happy to hear that there are more magical events scheduled for this month. As Niantic announced in a recent blog post, two Harry Potter: Wizards United Back to Hogwarts event weeks are in the books for August: the first one starts tomorrow, August 13, and runs through August 20, while the other will be held from August 27 through September 3.

During these weeks, players will receive "unique Registry Pages, new Brilliant Foundables, and Special Assignments which will uncover rewards such as Restricted Section Books and exclusive items for your Ministry ID Portrait." Each Back to Hogwarts week will yield different stuff, so don't think of the second week as a repeat. If you want to collect as many new items as possible, you'll want to play both weeks.

Incidentally, another event will be held smack in the middle of this month's second Back to Hogwarts week: the arrival of Harry Potter: Wizards Unite dragons. These beasts will first appear at the Indianapolis Fan Fest event on August 31, but they'll fly to the rest of the world immediately afterward. If an earlier tease holds up, we may also see ARG-style mysteries and group challenges added to the mobile cast-'em-up soon as well.