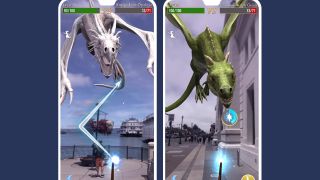 Harry Potter: Wizards Unite dragons are coming to put some more regional diversity into the game, but not before they get a big celebration at the first Harry Potter: Wizards Unite Fan Festival. The mythological beasts were revealed by developer Niantic at a San Diego Comic-Con panel, where the studio also confirmed that they will soon occupy a similar role as Pokemon Go's regional exclusive Pokemon.

Your first chance to catch - er, cast at - dragons will be at the Fan Festival event in Indianapolis on August 31 and September 1. Multiple different species such as the Antipodean Opaleye and the Common Welsh Green dragon will be Foundables at the event, after which Niantic will disperse them to "certain regions around the world." Make sure you register in the app now for the ticket drawing if you want to get a chance to explore Indiana's White River State Park with your fellow wandering wizards.

Niantic also confirmed you'll be able to even more of your travels as you're exploring in search of dragons. The game will soon be able to track your walking distances when not actively running, giving you the chance to earn rewards even when you can't have your phone out and at the ready.

The studio didn't give a timetable for when this feature will be added to the game, but hopefully it arrives in time for your travels in the next Harry Potter Wizards Unite Community Day event later this summer. Players walked over 270,000 kilometers and returned more than 12 million foundables during the last event, so you'd better bring your comfiest pointy wizard shoes.