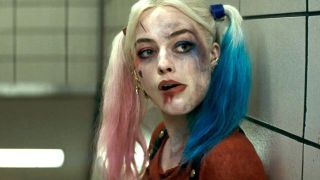 Despite some of DC’s movie failings, Margot Robbie’s Harley Quinn can do no wrong at the moment. Fresh off a Critics’ Choice award win, it has been revealed (via THR) that Margot Robbie would again play the role of Mistah J’s puddin’ in upcoming movie Gotham City Sirens – which will feature an all-female lead cast and be directed by Suicide Squad director David Ayer.

‘Gotham City Sirens?’ I hear some of you cry. If you don’t know your Tommy Elliots from your Tommy guns then step right this way.

Who are the Gotham City Sirens?

Their first (and only) appearance came in the Paul Dini-written comic series of the same name. Long story short: Harley Quinn, Poison Ivy and Catwoman are brought together and team up to fight rogue cops, a Joker imposter and, yes, knife-wielding Santas. Do I even need to tell you it’s amazeballs?

This isn’t your usual dark and dreary DC fare; Gotham City Sirens revels in its girl power and more playful attitude. The group dynamic between the villainous trio is the real star of the show, so DC have a real task on their hands casting Poison Ivy and Catwoman.

So, what's the plot going to be?

Details at this point are about as likely as The Riddler asking a yes or no question so we’ll have to take some inspiration from the comics for this one.

The movie should focus on how the Sirens get together but the comics drew from a rich background, one involving Catwoman’s missing heart (stolen by Bruce Wayne’s childhood friend turned villain, Tommy Elliot aka Hush. Seriously) as well as Poison Ivy and Harley Quinn’s desire to find out, from Catwoman, who Batman really is. The DC Cinematic Universe is missing that depth but, honestly, any old excuse would be fine just to see Poison Ivy fight alongside Harley Quinn.

Finding a good reason to get the Sirens together is the tricky part, but from then on DC have got some great stories to pick and choose from: Poison Ivy being framed for murder (I hope the evidence was planted), Catwoman’s deranged sister fighting the Sirens and, finally, Harley Quinn breaking into Arkham to free The Joker and leaving her fellow Sirens behind. Methinks that should be tucked away for when they reach sequel territory.

To keep with the all-girl theme, don’t be surprised to see Talia al Ghul (last seen on the big screen in The Dark Knight) to show up, especially as both her and Selina Kyle have a thing for Bruce Wayne and she could easily go toe-to-toe with Harley and the gang.

Major appearances  from Batman and The Joker are doubtful... unless you want the Sirens to be overshadowed in their own movie. Bad move.

A more interesting (and likely) take could be Hush, he of stealing Catwoman’s heart fame, fighting the Sirens. In the comics (and later in the Arkham games) Hush impersonated Bruce Wayne to ruin his reputation and later had a bone to pick with the Sirens. It could work well and Hush would be a formidable foe.

Want to get a head start on Gotham City Sirens and really impress your friends? Dive right into the Gotham City Sirens trade or maybe try Batman: Hush for a little bit of background knowledge on the best new Batman villain in years.

There you have it. Are you looking forward to Gotham City Sirens? Who and what do you expect to see in the movie? Let us know in the comments below!