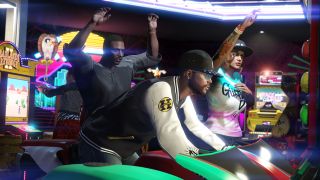 GTA Online's recent Casino Heist update has sent players on a wild goose chase, after discovering a cryptic riddle contained within the dialogue of Madam Nazar; a robotic fortune teller that can be bought and featured within the game's new Arcade hub space.

Speak to Madam Nazar, and there's a chance she'll respond with the numbers "123 7645112", which also happen to be the same sequence of digits spouted by the woman trapped in the bog at the Brathwaites Manor in Red Dead Redemption 2.

What's more, GTA Online players have discovered that ringing that number in-game takes you back through to Madam Nazar herself, who responds in equally vague fashion by teasing that "the future is open to me." Some have also stated that calling this number from Mount Chiliad will summon a ghost, with Nazar's dialogue on the phone slightly modified in addition.

Madam Nazar, as it happens, is also a real NPC in Red Dead Online, and the person to talk to if you want to begin your Wild West adventure as a Collector; one of several new Red Dead Online Roles available in Rockstar's online open world.

But the numbers (Mason), what do they mean? Some believe that Madam Nazar's prophetic riddles could be teasing a big new Rockstar announcement, either for the long promised story DLC in GTA 5 or the reveal of GTA 6 itself. Recent job listings have suggested the famed developer is working hard on its next big project, but nothing official has been announced of yet.

Alternatively, this could just be Rockstar having some fun with its own universe, but that isn't stopping players from analyzing every newly discovered number and phrase as another potential clue. It's all still very confusing at the moment, but we'll be sure to keep you informed if and when we hear anything else of note.

For more, check out these Red Dead Redemption 2 cheats, or watch the video below for our latest episode of Dialogue Options.