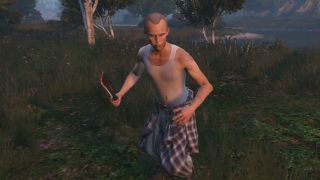 Everyone is currently on edge in Blaine County, and for good reason – there's a GTA Online serial killer on the loose, and it seems like nobody is safe. It's up to you to track down all of the serial killer clues, so you can finally confront the Los Santos Slasher and end his reign of terror. As well as dealing with the threat, you'll receive a cash bonus and unlock the GTA Online Navy Revolver – plus if you complete the follow up Navy Revolver Challenge you'll receive even more cash and also unlock the Red Dead Online Lowry's Revolver. Whether you just want a new pistol in GTA Online, or you want a new weapon to arm your Red Dead Online outlaw as well, we've got all the details here for solving the GTA Online serial killer mystery and taking out the Los Santos Slasher.

We've marked the locations of the five GTA Online serial killer clues on the map above, which you can click on to expand for a closer look – we've also included individual maps for each clue to help you pinpoint exactly where to go. Note that there are actually five markers for the fifth clue (5A-5E) as this can appear in any of those places, but we'll explain more about that later. You can collect these five clues in any order, so don't feel you have to stick to the one we've used here as it's purely for reference.

Around the back of the Bayview Lodge diner and general store in Paleto Forest, you'll find a small wooden shack with a bloody handprint on the door.

In the middle of the large farm in Grapeseed, just northwest of Trevor's smuggling airstrip, there's a machete embedded in the wall of a wooden barn.

At the northwest end of Trevor's main airstrip in the Grand Senora Desert, there's a gap in the metal fence where you'll find some tyres, rubbish bags, and a severed hand.

On the side of the large barn advertising Cherry Pie at the farm in Great Chaparral, a message from the serial killer reads "Can you find me?" on the wall under a light.

This clue is different to the others, as instead of having a fixed location there are actually five difference places in which the GTA Online serial killer's black van can appear. We'll list all of them below, so if you go to one and the vehicle isn't there then move on to the next location.

Across the rail line just southwest of Palmer-Taylor Power Station, behind a large red storage tank.

On a track by the rail line under the freeway in San Chianski Mountain Range.

By the side of a rail bridge in Mount Gordo, on top of some planks of wood.

In a small clearing among trees on the north side of the river in Ratton Canyon.

On one of the marshy outcrops on the north side of the river in Lago Zancudo, just southeast of Fort Zancudo.

How to unlock the GTA Online Navy Revolver

Once you've found all five clues, you'll receive a text message from the GTA Online serial killer. This reads:

"I'm sick of you sticking your nose in where it doesn't belong! Now I'm not going to lie... what happens next... won't be nice for you."

The Los Santos Slasher is now on your trail, though he will only appear between the hours of 19:00 and 05:00 in areas to the north side of the island. Go and hang around up there, until a red skull icon appears on your map – the serial killer spawns behind you, so be ready to fight!

How to unlock the Red Dead Online Lowry's Revolver

Once you have the GTA Online Navy Revolver in your possession, you'll need to get 50 kills with it to complete the Navy Revolver Challenge. Thankfully these can be NPCs, so you can just head into a populated area and start racking them up without having to take on other players. You'll receive a countdown notification of your total every 10 kills, and once you've done all 50 you'll receive another $200,000 in your account along with confirmation that an exclusive weapon in Red Dead Online is discoverable.

To find the Red Dead Online Lowry's Revolver, head along the path west from Valentine until you reach the building we've marked on the map above. When you approach it, you'll discover it's a seemingly abandoned ruin, although ominously the shutters leading down to the cellar are wide open. Brace yourself, take a deep breath, and head inside...

Clearly you've discovered the den of a serial killer, and there are some pretty shocking sights if you fully explore the cellar. Inspect the bench to the side and open the lock box to find the Red Dead Online Lowry's Revolver, which is the Western equivalent of the GTA Online Navy Revolver. Lowry's Revolver has some pretty decent stats for a handgun, which makes it a decent addition to any cowpoke's arsenal. Now you just need to forget about the horrors you had to witness in that basement in order to get it!