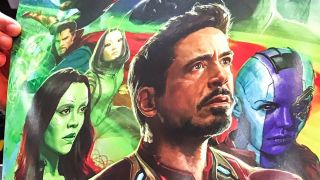 It's no surprise that pretty much *everyone* from the MCU is set to appear in Avengers: Infinity War, but that doesn't make it any less awesome to see them all together. To mark the first official day of San Diego Comic Con, Marvel is giving away Infinity War posters to lucky attendees:

SDCC-ers, we're giving away this #InfinityWar concept art poster at the #MarvelSDCC booth now! Stop by and grab one if you can... pic.twitter.com/Qtum3mDDMQJuly 20, 2017

Ah, it's glorious isn't it? As an SDCC exclusive, it's likely that the theatrical posters will differ significantly, and potentially include MORE characters. I mean, if that's even possible.