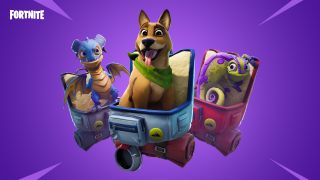 We first met the Fortnite Pets back in Season 6, and since then the number and variety of adorable pals has continued to grow. Two seasons of Fortnite later we now have a selection of dogs, as well as a dragon, a chameleon, a hamster, a fox, a fancy cat, and even an angry little gingerbread man! Better still, the v8.40 update has now answered the age old question of how to pet the dog in Fortnite, as you can now interact with dogs (or any other Pets) and give them a friendly stroke. If you're wondering what Fortnite Pets actually do then we're here to help, as we'll tell you everything you need to know about what they are, what they do, and who really is a good boy.

You can see how to pet the dog in Fortnite by watching our video below:

There are nine Fortnite Pets in total, and to be honest, they don't actually do anything. They're simply another back bling you can equip on your character and they look absolutely adorable. Here's the full Fortnite Pets list, as of Season 8.

Bonesy was the first Pet introduced to Fortnite, near the start of the Season 6 Battle Pass. He's also the best boy in all the world and has three colours; tan, white, and mocha.

Camo was unlocked further through the Battle Pass, and he can catch flies with his tongue. He's only got the one colour scheme but he screams with delight as you jump out of the battle bus, so it's hard not to bring him along.

The final Pet in the Season 6 Battle Pass was Scales. He's ready to fight anyone and will protect you at all costs... in theory. In reality, he's no more or less useful than the other Pets, so he can't scrap for you. You can get Scales in blue, pink, and black.

On to the Season 7 Battle Pass now and Hamirez is the chubbiest hamster the world has ever seen. Put her on your back and watch her run in the wheel she can just about squeeze into, and clap her tiny paws with joy. She comes in tan, pink, and mocha.

Remus was the second dog available in Fortnite, and he's a strong contender for the best boy award. He's younger and braver than Bonesy, untamed and unafraid. Remus comes in grey, skull, and ice.

Merry Munchkin is less of a Pet, and more like a very angry child on your back. Arms crossed, brows frowned, candy cane chewed... he will fight you. He was only available as a reward during the 14 Days of Fortnite Challenges for Christmas 2018.

A third dog option, Woodsy is the first Pet in the Season 8 Battle Pass. This wooden friend is hand carved, and is up for any adventure. Along with his default colour scheme, you can also get him in pirate and gold.

Dodger is a fox, equipped with aviator goggles and a scarf. Her dream is to conquer the skies and fly around the world but unfortunately, she's stuck with a rickety old bus with a balloon on top. She comes in black and camo along with her default option.

The only Pet so far to be exclusively available in the shop, Empress is a majestic princess. She sits atop her armchair throne, judging all the competitors as she rides on your back to victory. She costs 1,000 V-Bucks if you want to purchase this queen.

What Fortnite Pet customisation styles are there?

Most Fortnite Pets have unique customisation options, the specifics have been detailed above. An extra benefit to Camo is that he'll change colour to reflect the item you pick up. Check it out below.

So that's how Pets work; a battle royale companion to keep you company on those lonely afternoons sat in a bush hoping you don't get shot. No doubt we'll see plenty more Fortnite Pets as the seasons go on. Personally, I want a pet cow.

If you really, really love Fortnite then here some of the best Fortnite merch to spend actual money on. No V-Bucks accepted.