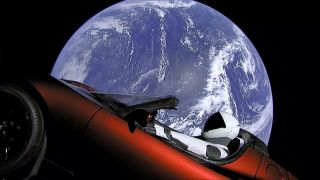 Less than two months ago, Rockstar launched The Doomsday Heist update for GTA Online, in which players drove flying cars, deployed high tech weaponry, and generally performed all kinds of crazy stunts at the behest of an enigmatic multi-billionaire tech entrepreneur called Avon Hertz, who wants to save the world.

Yesterday, Elon Musk, an enigmatic multi-billionaire tech entrepreneur who wants to save the world, launched a car into space; which is basically the next closest thing to an actual flying car (and no, I'm not counting those ones that can hover around the same speed as a forlorn snail).

Can you spot the resemblance? GTA 5 players certainly could, and were more than happy to make their comparisons between yesterday's SpaceX launch and the kind of bonkers madness you can accomplish in Rockstar's open-world crime-fest.

Let's offer some context first; the launch of the Falcon Heavy represented the most powerful rocket in operation shooting off into space, with a goal to send its cargo - Musk's own person Tesla sports car - into Mars' orbit.

The car was rigged up with cameras, allowing for some truly incredible shots like the one seen above, as it continues to make its way towards its destination. If you've played Grand Theft Auto 5, then you know that driving cars in the game also allow you to explore some unique and stylish camera options.

Squint towards the SpaceX live-stream, then, and you could easily mistake it for "just another day in GTA", as this observant Redditer noticed with this screenshot.

That online commentor wasn't the only one, either. As thousands were glued to the live SpaceX footage as it took place, plenty headed to social media to express their surprise at how uncannily GTA-like the whole thing felt.

Talk of a new "SpaceX Mod" for the PC version of Grand Theft Auto 5 quickly began to circulate, but seeing as you can't actually leave Los Santos' stratosphere in the game, it's unclear how exactly that would play out as an imitation of yesterday's event.

In GTA there's a Tesla with a rocket on it. Now, in real life, there's a rocket with a Tesla on it. What a time to be alive when billionaires make video game shit into realityFebruary 7, 2018

It does lead  me to wonder what Rockstar makes of all this, and whether members of the team are jotting down notes for future inspiration in writing GTA 6's story (you just know they're already thinking about it). Perhaps they're too preoccupied with Red Dead Redemption 2 to care.

Given that Grand Theft Auto has always enjoyed satirising the excesses of the contemporary American lifestyle, though, the continued adventures of Elon Musk are practically a gold mine for Rockstar's razor-sharp ire.

What did you think of the SpaceX launch? Are you ready to colonise Mars, or would you rather stay on Earth and wait for Red Dead Redemption to come out instead? Share your thoughts in the comments.