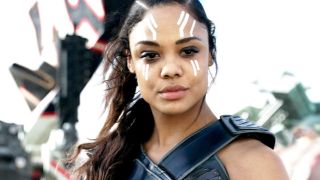 Friday is so close we can taste it, so to help you power through Thursday evening we've distilled all the day's news into one must-read hit.

The freaking awesome Thompson made our hearts grow three sizes with her latest red carpet chat. "I think [Marvel boss] Kevin Feige is really excited by the idea, and if you look at what's happened already in Phase 4 with me and [Thompson's character] Valkyrie and our story, and then in Black Panther the women rule supreme," she told IGN. "There's an interest - they're doing Captain Marvel, they're doing a Black Widow - there's an interest in having women at the forefront of this phase. I feel like it's hopeful, who knows."

The Witcher developer spills some tea on loot boxes

"Gamers are striking back, and I really hope this will change our industry for the better," CD Projekt Red co-founder Marcin Iwiński told PC Gamer. " Where we stand is quite simple and you could see it with all of our past releases—most recently The Witcher 3: Wild Hunt and Gwent. If you buy a full priced game, you should get a big, polished piece of content, which gives you many, many hours of fun gameplay."

It's a busy time at Rainbow Six Siege HQ right now. Not only is there a free weekend running until February 20 to lure you back in, but they've added some new operators to the crew. Lion and Finka are "hot zone specialists are experts in matters of biological warfare and veterans of numerous conflicts," so they sounds pretty handy to have around.

The British star is the latest big name to sign up to the live action Pokemon movie, alongside Ryan Reynolds and national treasure Bill Nighy. No news on who she'll play, but we definitely picture her as a fire type Pokemon. Maybe a Braixen?

Good news for lonely farmers, the latest update on that Stardew Valley multiplayer mode suggests it's still on target for spring. "Work on the new features is done, and we’ve sent all the new text off to be translated into the different languages," says the developer. "Meanwhile, we are working on bug fixes." I can't wait to show strangers my melons.

These Solo: A Star Wars Story action figures reveal what the characters are REALLY thinking

CoD 4: The Movie? Call of Duty kicks off its cinematic universe by hiring a director specialising in… modern warfare

This game where love is literally Hell helped its creator get over a breakup, and he hopes it'll help others