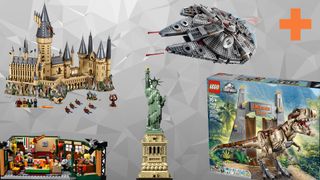 For anyone familiar with Lego, you’ll be aware these colourful, connectable bricks, no matter how old you are, don’t age-discriminate. But how to pick out the best Lego sets? After all, you’ll also know that Lego comes in all shapes and sizes: from the hand-sized to the table fillers, spanning a number of franchises including Marvel, Harry Potter, Star Wars, and Frozen. Any piece from any line would make an ideal gifts, but the wonder of Lego isn’t reserved just for Christmas - it’s valid the entire year round. And with new ranges emerging at any given point because, let’s face it, Lego is something that sells globally and by the truckload, there’s no sign of one of the most famous toy brands going away any time soon.

It doesn’t matter if you’re settling down to begin a build after Christmas dinner or while avoiding the summer heat on a sticky July day: any time is a good time for Lego, trust us, so here are the best Lego sets every brick enthusiast should be seeking out in 2019. If you want to get more specific, here are the best Star Wars Lego sets too.

As all Star Wars fans will attest, being a collector can be punishing on the bank balance, and the Lego range is no exception. With the final film in the so-called Skywalker Saga - The Rise of Skywalker - upon us, and an increasing number of sets costing in excess of $200 (the top-end Millenuim Falcon will set you back $649), this new budget (but equally cool) version is a more viable addition during the franchise’s inevitable festive buzz. What’s more, it’s complete with a number of detailed features, such as its trusty smuggling compartments and a dashingly middle-aged Lando.

2. The Upside Down (Stranger Things)

Until recently we’d not seen anything connected to the teeny existence of Stranger Things, so it felt apt when Lego released one almighty build set - but with a quite literal twist. The Upside Down plays a significant role in the Netflix show so is naturally the sole focus on the line’s only release. The unique element here is that it incorporates both elements of the real world and Upside Down via the flip of a platform. Currently in the ‘hard to find’ category even on the official Lego store, the size and originality of this piece is worth the money alone.

3. The Statue of Liberty

The Architecture series has plenty of accurate and great-for-display sets, including Trafalgar Square, The Great Wall of China, and The United States Capitol Building. And while the latter appears mouthwateringly good from afar, the most impressive in the line has to be The Statue of Liberty: no merely because it takes up far less room than a regular build but mainly due to its aesthetic superiority and overall finish. Take a closer look if you don’t believe us. Sure, the £90 price tag may put some off but when you see it in person you’ll change your mind.

Lego is known for both revitalised existing franchises and reviving old favourites - this is a major selling point for the brand. So when Lego released this classic Disney kit earlier this year it became something of a must-have. Anyone familiar with the Disney’s early history will know 1928’s Steamboat Willie was the first (released) animated film to feature Minnie and Mickey Mouse. And this set took it back where it all began, with Mickey and Minnie chugging down the river on their steamboat - all in a black and white (and grey) kit, to boot.

The ‘90s-centric sitcom may have come to an end 15 years ago (yes, it’s been that long!) but that hasn’t prevented Lego from releasing a set - albeit in their own sweet time. And yep, you’ve guessed it, it’s based around Central Perk. Just shy of $65 isn’t too shabby, considering the size and detail of the set because it’s got it all: from Phoebe’s open mic area for a rendition of ‘Smelly Cat’, to Gunther assuming his role behind the counter, to that sneaky reserved sign that’s been sat on the gang’s table all these years - this is an essential buy for TV buffs.

6. Welcome to Apocalypseberg! (The Lego Movie)

After the storming success of 2014’s ‘The Lego Movie’, a sequel was all but inevitable. And with them came the perfect line of Lego sets to accompany each installment. Yet it’s one of the more extravagant structures from the sequel that proves most alluring: Apocalyseburg!. Don’t get us wrong, the Rexcelsior! ss a thing of beauty, but you can’t go wrong with a Wild West style half-sunken Statue of Liberty, right? It’ll require a lot of hours and a big area for display but you have to agree that it’s one of Lego’s most innovative and intricate builds in years.

Today's best LEGO Welcome to Apocalypseburg! deals
The LEGO Movie 2: Welcome to...
Amazon
AU
$6.99
View
We check over 130 million products every day for the best prices

‘Harry Potter’ fans fear not, we’ve not forgotten you! Even by Lego’s standards this is a hard one to find (it even says so on their site), so combining its scarcity with the breaktaking price will no doubt deter some from hunting it down. Our advice? Don’t be. Because this is the ultimate Potter set you can get your hands on. At just over 6,000 pieces, this 16+ age recommended build isn’t for the faint hearted. It’s huge, it’s expandable, it’s detailed, and yes it possesses every minute detail a Potter fan could desire - even the moving staircase.

Given that Jurassic World: Fallen Kingdom is a movie sequel to forget, Lego has (wisely) transported us back to 1993 with an original Jurassic Park Lego release. And it’s arguably the pinnacle of what’s on offer dino-wise. Sure, a breached visitor centre from the film’s finale might have been a perfect set to release, but this one won’t take up loads of space when complete. Plus it’s got everything fans of the Spielberg classic could want: from that wobbly green jello, to a bare-chested Ian Malcolm, and even a toilet in a nod to that infamous scene where the T-Rex gorges on the cowardly, yet tasty lawyer.