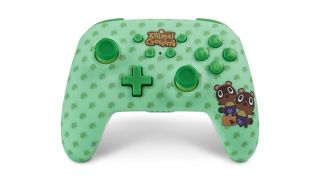 Update: The Animal Crossing PowerA Switch controllers have now appeared on more store listings, meaning folks in the UK and US are now able to preorder these adorable controllers. Available on Amazon US for $49.99 and GAME for £39.99, they are due to release on March 20, 2020.

Original story: A store listing for a new set of PowerA Switch controllers featuring delightful Animal Crossing designs have appeared online. The controllers are a pastel green shade complete with a fitting leafy pattern and come in two slight variations. One features KK Slider playing his signature guitar, while the other is finished off with Timmy and Tommy on one of the controller handles.

So far the adorable Animal Crossing controllers only appear to be listed on one French store with the price tag of €49.99, and as of writing this article, neither show up in the catalogue of controllers on PowerA's official website. We've reached out to PowerA to verify if these controllers are in fact on the way, and we'll be updating this article if we receive a reply.

The product listing says the controller is officially licensed by Nintendo and comes with Bluetooth 5.0 wireless capability, programmable buttons, and gyroscope functionality. From the images on the listing, it does look like the real deal, and the release date on the product lines up with Animal Crossing: New Horizons' release date on March 20, 2020. The PowerA controllers are a pretty neat alternative to the Pro controller, with some fun designs that nod to some of the biggest Switch games.

With Tom Nook's getaway package promising to take us to a desert island with a whole host of customisation options and all kinds of activities to get stuck into, we're set for some hearty sessions of Animal Crossing goodness. And personally, I'm here for all of the Animal Crossing merch that appears to be on the horizon (sorry).

Here are all of the upcoming Switch games for 2020 and beyond.

After contributing to Gamesradar+ for a few months, I somehow bagged myself my dream job as a full-time Staff Writer. You'll see all sorts of articles from me here, including news, reviews, previews, and features.