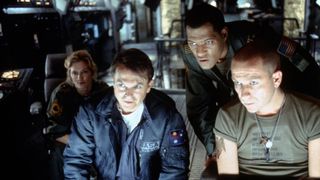 Amazon is at it again. According to Variety, Amazon, in partnership with Paramount Studios, is working on an episodic version of the 1997 horror movie Event Horizon.

Not many details about casting, production timelines, or general story of the show are known just yet. But Variety also reports that Adam Wingard, the director behind Godzilla vs. Kong, The Blair Witch reboot, and The Guest, will act as an executive producer on the show.

Event Horizon, which was directed by Paul W. S. Anderson and stars Laurence Fishburne and Sam Neill, follows a rescue mission to a long lost starship. The lost ship, named Event Horizon, has an experimental gravity drive that generates a black hole that bridges two points in space time. It's discovered that the ship used the tech to travel to a hellish dimension where the original crew were massacred.

Amazon is already turning Lord of the Rings, one of the most beloved fantasy stories of all time, into a series of its own. They previously announced they had purchased the rights to produce five seasons and, due to the sheer scale of the Tolkien show, it probably won't make it to Amazon Prime for some time.

We don't know much about either the Lord of the Rings or the Event Horizon series yet, but Amazon has some pretty high expectations for both.

Need more to watch on-the-go? Here are some of the best shows on Amazon Prime.