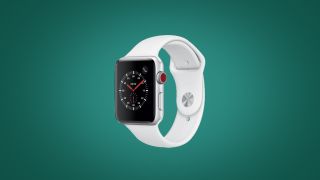 We honestly didn't expect Apple Watch prices to be amongst the highlights of today's President Day's sales, but here we are looking at an Apple Watch 3 for an all-time low at just $189 at Walmart. And here's you still reading this? Thanks, but you should really get a move on if you want to take advantage of this superb offer.

If you're wanting something a bit newer then we've rounded up some of the best offers for the Apple Watch 4 deals and the newer Apple Watch 5. Be careful though, stock on the later is already dangerously low.

In all honesty, there's not exactly a world of difference between the last few Apple Watches' design and features, so there's a great opportunity to make a great saving and a smart one too.

The Apple Watch 5 of course, runs a little faster than the older models and has a larger display area and advanced heart-tracking features including ECG monitoring and fall-detection. That might not quite be enough for you to fork over the extra cash though.

Apple Watch 3 | GPS | 38mm | $189 at Walmart
This Apple Watch still holds up very well today and continues to be a popular pick for smartwatch fans thanks to the price being significantly cheaper than the 4 and 5 models. Walmart has this model in space Gray or White. We've never seen the price drop this low either.
View Deal

Apple Watch 4 (open box) | GPS | 40mm | $295.99 at Best Buy
This open box deal 'looks brand new' and offers a massive saving over the regular price. Apple has stopped making this model now as it tries to push people towards the newer 5 series - which isn't that much different from the Apple Watch 4. It looks like Best Buy is having a clearout too, so this won't last long. Also available with a gold chassis and light pink strap for the same price. Or there's the Nike version (brand new) at $314.99 today.
View Deal

Apple Watch 5 | GPS | 40mm | $384 at Walmart
Ok, a $15 discount isn't exactly Black Friday levels of discount crazy, but it's rare to see any sort of reduction on the newest entry in the series - the Apple Watch 5. The older 3 and 4 models are a lot cheaper today though.View Deal

Looking for some late (hopefully not too late) Valentine's gifts? How about a Disney Plus gift card? Or have you seen the latest Kindle prices? And don't forget, couples that play together, stay together, so head on over to our guide to the best board games for two players.