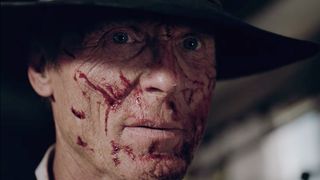 Westworld season 2 might only be one week into shooting, but that didn’t stop HBO releasing an incredible teaser during its Hall H panel at SDCC 2017. No doubt you’ve seen it by now (if you’re anything like me, you’ve seen it a few times!), but in your drunken state of excitement and euphoria, there’s a few things you might have missed which give us clues to what to expect from the new season. Given that this will probably be the only bit of information we get on the show for a while, it’s worth having a deeper dive at what we saw.

1. Is that a sneak peek at SamuraiWorld?

Most of the landscapes in the teaser are familiar to us from season 1 but some fans have suggested that we’re seeing some of SamuraiWorld as well. The other world was teased at the end of season 1, and it’s the above shot of Bernard (host Bernard, not human Bernard) looking at a dead tiger which gives us this hint. Although it’s hard to make out, it’s been suggested that this is a Bengal tiger which is traditional native of Asia. Admittedly, it would be hard to imagine a tiger roaming around the Wild West so the theory is sound. Of course, all the animals in Westworld (and presumable its sister parks) are man-made Hosts as well so it’s likely that this tiger has been made for SamuraiWorld.

Most of the scenes in the teaser went by pretty fast and were annoyingly obscure, so it’s hard to make out what’s happening in a lot of them. In this scene though, we clearly see someone swinging upside down from a tree, desperately trying to reach a gun lying on the ground. It’s hard to say for sure, but I think this looks like Lawrence, and we have seen him in this position before. Could it be that the Man in Black has got hold of him again and it using this tried and tested method of torture? See the two horses in the background? This suggests that whoever strung him up is still around, which probably accounts for why he’s trying so hard to reach that pistol.

3. It’s not just the humans who are dying

While much of the teaser features the Hosts fighting back and killing the human guests who would have done the same to them, it’s not just the humans who are dying. You’d be forgiven for thinking so given the bloodbaths we’ve already witnessed, but in the above shot you can clearly make out a Host lying dead on the ground. At least, I assume it’s a Host - she’s naked from the waist up, wearing a western-style skirt, and is near one of the back rooms the Westworld technicians used for maintenance, so I think we can confidently say she’s a Host. In this case, it looks like it won’t be a black and white war between the robots and the humans. Do some of the Hosts just not care about their kin or are some of them still programmed to protect humans and getting in the way? Of course, the other option is that she was killed by a human who fought back and won.

4. Stubbs is back (and maybe Elsie too?)

We already knew that both characters - who had unresolved storylines by the end of season 1 - would return, but it’s good to see them on screen. You can clearly see Head of Security Stubbs in the front of this vehicle, but Elsie is harder to make out. I think it’s her sat next to Bernard but I can’t be sure. There’s no clue here to how they escaped their respective fates, but there’s a good chance they found each other and are now on a mission to rescue as many humans from the malfunctioning park as they can. That’s why they’ve picked up Bernard who they believe is human.

5. The Man in Black’s smile

The trailer ends with a shot of the Man in Black covered in blood who unsurprisingly is still alive despite the robot rebellion. As the camera closes in on his face you see a slight smirk start to spread across his face, which is more than a little disconcerting. I think we can all guess why he’s so happy - Westworld has finally provided him with a challenge worth his time. Given that his big issue with the park in season 1 was the fact that the Hosts can’t actually hurt the guests (what’s the point, right?), I’m guessing he’s so happy because he just came super close to real death for the first time since he set foot in the park. We’re probably looking at the aftermath of an epic showdown between him and some Hosts.