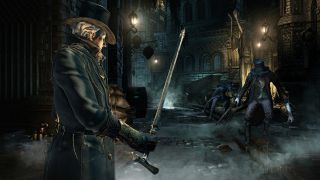 “The first is the stage of original ignorance in which a person knows nothing about the art of combat. In a fight he simply blocks and strikes instinctively without concern for what is right and wrong. The second stage begins when a person is taught the different ways of blocking, striking, kicking, standing, and thinking — but unfortunately his mind tends to freeze at different movements for calculations and analysis. The third stage — the stage of artlessness — occurs when, instead of trying to impose on his mind, he adjusts himself to his opponent like water. He is no longer confined.”

Why yes, I did just begin an editorial about fighting in a video game with a quote from actual fighter Bruce Lee. But Lee’s words apply to Bloodborne because, give or take a frightening horde of nightmarish magical netherbeasts, it’s a game fundamentally attuned to the philosophy of fighting. At first you’ll play like Lee’s stage one, trying desperately to land strikes without knowledge of enemy behaviour or attack windows. In time you’ll graduate to stage two (if you’ve played previous From Software games you’re already here), uncovering and slavishly operating within predefined mechanics. Only after countless hours can you call yourself a stage three player, expressive, loose, and most importantly, free. Bloodborne gives more freedom than you'd expect.

First, let’s talk rules. R1 throws light attacks and R2 throws heavy, while a green endurance bar governs how many attacks you can unleash before having to pause for breath. The bigger your bar is, the longer you can duke it out for. Since moves cost less stamina than in earlier From games, combat is packed with evades, rolls, jumps, and dynamic attack chains. Despite retaining a cerebral, mathematical, deliberate essence, it plays with the hurried urgency of a hack-and-slash.

But Bloodborne introduces just as much as it improves. So-called trick weapons now give players a secondary function - with a press of L1, the hunter axe extends with a sparky metallic clink into a halberd with a broader palette of attacks, and you can weave these transformations into combos. My go-to barrage starts with three slashes of the axe before I pop out its spring-loaded handle like a lightsabre and powerfully prod enemies to a manageable distance.

Not all weapons transform in the same way. Ludwig’s Greatsword sees players plunge the blade into its ornate sheathe and wield it double-handed. Others are explicit two-for-one deals, such as the Kirkhammer which gives players a silver shortsword for light hacking and a bloody great hammer for blunt force trauma. Weapon morphs effectively double your move pool, augmenting combat to give you a fiercer array of options.

At the very least, weapon-specific transformations look cool as hell. Think walking down a shrouded forest path and revving up your electric morning star in a crackle of blue lightning which illuminates the gnarled trees, or sizing up a howling hamlet of crazed witches as you flick out your fanged saw like an old-school shaving razor. It works in the reverse, too: after beating a boss I’ll often stand defiantly as it melts to ash, cathartically clicking back my weapon as the words ‘Prey Slaughtered’ fill the screen. Preparing your style pre-fight is Bloodborne’s equivalent of cocking a shotgun.

And that’s just your right hand. In your left there are firearms, not so much viable options to deal damage from range as physical manifestations of the old parry system that work by interrupting enemy attacks and giving you an opening to trigger a takedown. I haven’t quite worked out the timings, especially on the more unpredictable enemies like lycanthropes, but they’re incredibly effective against heavy trolls. They wind up a leaping attack, I blast my blunderbuss, and they fall to their knees ready to be impaled. I found a cannon in a dilapidated windmill which functions as an area-of-effect crowd-clearer, but its ten-bullet toll per-shot is too rich for my blood.

People have criticised - and I can see why - the reduced scope for experimentation, the lack of impetus to spec towards a specific build. In Dark Souls I played a hideously powerful devotee of the Dragon Fang, then an untouchable rapier lord learned in the arts of parry and riposte. Then I played again, as a team-buffing miracle worker healing friends and throwing lighting. And finally I was a tricksy conjurer who could turn into a pot. That’s right. A pot. Here, give or take a few extra investments of blood echoes into the appropriate attribute, you can try most weapons on a single playthrough.

No more eager anticipation of finally wielding that one weapon you were born to wield, no more revelling in its mastery. Lore-wise, most tools here belong to the Hunter collective, not to you. You don’t find them by chance or craft them with boss souls (there are no boss souls), but receive them like hand-me-down dungarees (albeit lethal, transforming dungarees).

Richer combat is the counterweight. Whereas From's combat intricacies used to lie before the fight itself - in the levelling and preparation, the overall theorycraft of designing a narrow, personal combat system - now they take place inside it, to the point where I still don’t really know how deep the rabbit hole goes. Sometimes a quick dodge and thrust results in an animation I haven’t seen before. Sometimes I’ll find the perfect sequence of moves that link seamlessly like choreography. There’s more to discover; I haven’t quite bumped up against Bloodborne’s edges.

While I can forgive streamlining, I do miss worrying about weight. Whenever I found a new weapon or armour piece in Dark Souls, I ritualistically donned it to check the penalty on my poise. Slow, medium, and fast movement speeds were there to offset the insane defense bonus you’d get from something like Havel’s wearable fortress. By necessity, that system has been removed, but again, there's a pay-off. Simply, Bloodborne’s combat is built for speed. It’s designed for honey badgers, not tortoises.

Like a honey badger you’re always on the attack, using your increased swiftness to strike opponents before they do the same. You’re going to hit and get hit, so that’s why From have implemented a short window in which, after taking damage, you can strike back to regain health. The best form of defence is attack. The fastest form of recovery is attack. In Bloodborne - with its deeper movesets, quicker combat, and firearms that actually work better at short range, promoting rather replacing melee attacks - it pays to be a vicious little blighter.

It's a rather drastic philosophical change from what you might be used to, but it's one well worth making.