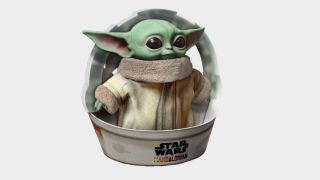 This is the toy you’re looking for. We were promised Baby Yoda merch and, as is The Way, it comes just after the wave of Cyber Monday Star Wars deals have entered their final hours. Still, the only way to get a true-to-life version of The Mandalorian’s best character is to pre-order this utterly adorable 11-inch plush for $24.99 at Walmart – so it’s worth committing to it now before it inevitably sells out.

While the Baby Yoda plush isn’t out until June 1 at the earliest, it pays to get in there early and pre-order now. The little green dude is undoubtedly the most popular thing to come out of a galaxy far, far away in years, and it’s going to sell like Hoth cakes. And this isn’t just Baby Yoda hastily printed on a t-shirt or on a coffee mug. This is real deal, just as he looks in The Mandalorian. He’s even got his cutesy little coat, which only makes him extra sweet.

If you somehow need another reason to adopt Baby Yoda, he’s described as being “perfect for cuddling.” Imagine, six months from now, you’re having a rough day and Baby freakin’ Yoda arrives at your doorstep. All is well. You can even drink soup together.

It’s also worth mentioning that Walmart takes your money upon pre-ordering. So, you can pay now and you won’t have to worry about scrambling to find a Baby Yoda on the shelves come 2020. My money was on May the 4th but that clearly made too much sense.

Update: It looks like the Baby Yoda plushie has been removed from Walmart's site, we're investigating if it's due to a sell out or something else.

Keep tabs on when you can see Baby Yoda next with our look at The Mandalorian release schedule.

Cyber Monday game deals from across the web