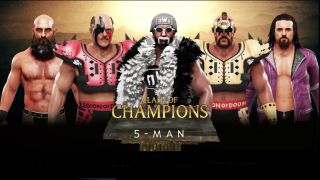 With WrestleMania 35 and WWE's Superstar Shake-up in the books, WWE 2K19 CAWs are the focus of the community as fans scramble to add key players missing from the WWE 2K19 roster. For instance, Buddy Murphy has just been added to Smackdown Live despite being one of the most prominent WWE 2K19 missing wrestlers. Thankfully, such overnights are easily overcome.

By signing into the game's community creations servers WWE 2K19 CAWs such as those listed here can be instantly downloaded – enabling the addition of not only Murphy, but past favourites such as Legion Of Doom or Hulk Hogan. Below you'll find eleven of the best for WWE 2K19. If you're already looking ahead to next year, then be sure to also check out our WWE 2K20 roster guide.

Creator dyn0mytecaw’s fantastic offerings have a late-1980s focus, with this spot-on Legion Of Doom tandem complemented by excellent Hulk Hogan, Crush and Demolition CAWs. If/when he adds the Nasty Boys, Powers of Pain and The Headshrinkers my retro tag-teams-only foundation will finally be good to go. LOD also feature in our list of 15 wrestlers you’ll never see again in a WWE game.

That famous surname isn’t for show. Tessa is the real-life daughter of ‘Four Horseman’ member Tully Blanchard, and looked on track for great things during WWE appearances on NXT and 2017’s all-women Mae Young Classic tournament. But no permanent deal was offered, and she’s now the standout lady ‘rassler in rival Impact Wrestling. This creation was made by MrHellInBoots.

Eamonn120385 has graced GamesRadar before, after making an outstanding Tony Nese for WWE 2K18 – and was back on form within two weeks of WWE 2K19's release with CAWs such as this one. Brian Kendrick is the only 205 Live regular absent from this year’s game, but Eamonn’s leather-jacketed recreation tackles that problem with style.

After capturing WWE’s Cruiserweight Championship from Cedric Alexander in his home nation of Australia, Murphy became one of the most-uploaded wrestlers on 2K19’s Community Creations servers – and SOLID-SNAKE618’s doppelgänger is the most accurate. The Ozzie technician was called-up to Smackdown Live in WWE's 2019 Superstar Shake-up.

Following in the footsteps of country-women Asuka and Kairi Sane, Japanese scrapper Shirai looks set for a colossal year on the NXT brand, with an appearance in the final of the 2018 Mae Young Classic already under her belt. Gabe8th concocted this brilliant lookalike, and it’s not his only creation that comes highly recommended. Nikki Cross (below) is also his work.

Many insiders tabbed the Hulkster for a WWE return last year, and sure enough he hosted the company's controversial Crown Jewel show – and appeared once more at WrestleMania 35. Right now he's the odds-on favourite to be WWE 2K20's now-traditional pre-order bonus. In the meantime, this Dreamhunter74 creation is the best you’ll get.

When four-person stable Sanity was promoted from NXT to Smackdown it lost arguably its most popular member, Nikki Cross – and the Scot miraculously disappeared from the WWE 2K19 roster. Thankfully her entrance template is still included, and this Gabe8th model comes with both that and the Sanity theme tune. Not quite the same as her real one, but close enough.

A noisy number of fans remain disillusioned at Ciampa being exiled from WWE 2K19 despite claiming the NXT Championship in July 2018. Kudos to renowned CAW-maker Defract, then, for piecing together a model that’s almost as good as his authentic one from WWE 2K18. Sadly, there’s still no way to get Ciampa’s new theme tune. I recommend 'Cubes 1' as a replacement.

Former WCW and WWE favourite Torrie Wilson returned for a Royal Rumble 2018 cameo role, now a fitness instructor and in the best shape of her career at the grand young age of 42. She’ll be one of this year’s most popular adds following her 2019 Hall Of Fame induction. Excellent work here from williamcruzana.

His username isn't the catchiest, but cawmunitycre8ion has done a credible job of implementing old-school elements within WWE 2K19. In addition to this Yokozuna effort he’s made AJ Lee, Stacy Keibler and Melina, plus retro arenas for Monday Night Raw, Wrestling Challenge, WWF Royal Rumble and WCW Bash at the Beach. Too sweet.

WWE 2K19 is out now. Wondering how else you can bolster your roster with official superstars? Then check out GR’s WWE 2K19 DLC guide.