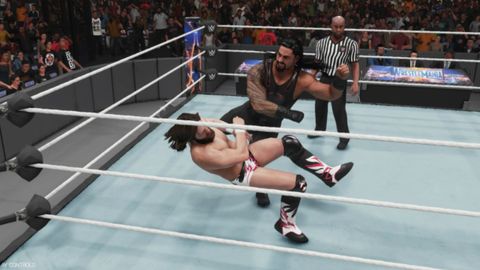 A spectacular throwback to the era when wrestling games were must-own. Add live – or even quarterly – updates to 2K20 and it’ll be a first-ballot Hall of Famer.

Accurate, up-to-date rosters are the foundation of every modern sports sim. It wasn’t always this way – witness the excellence of largely unlicensed football efforts Sensible Soccer in the ‘90s, and PES in the 2000s. But times have changed, and sales figures will tell you that the uncanny valley generation wants its real faces and proper kits/uniforms/attires. You wouldn’t see FIFA launch without Derby County or RC Lens; nor Madden minus the Oakland Raiders and Cleveland Browns. Which is why WWE 2K19’s release triggered widespread community dismay, thanks to the puzzling exclusions of Tommaso Ciampa, Nikki Cross and Brian Kendrick – three wrestlers from last year’s game still contracted to WWE, yet bafflingly axed.

As a stickler for authenticity, I’d been vocal about these omissions in GR's WWE 2K19 DLC guide. Ciampa’s appeared especially curious given that he’s the reigning NXT Champion, and best heel in WWE. Here's the thing, though: I was wrong. Postpone the apocalypse, because 2K19 emphatically overcomes the loss of these grapplers in two ways. For one, lifelike fan-made versions of Ciampa and Cross are already available via the excellent Community Creations servers. Secondly, a collection of tangible improvements inside and outside the ring make you forget roster shortcomings, for the most part.

A change of CAWs

Take MyCareer. Since the WWE license switch from THQ to 2K in 2013, all attempts at a create-a-character story mode have tanked. Nonsensical AI choices, convoluted progression mechanics and tedious week-to-week match cards made for a directionless trudge year after year, forcing Visual Concepts to take a rethink ahead of 2K19. And what a rethink. Transformed from the ground up with a linear narrative and fully voiced cast – part real, part fictional – MyCareer is sports gaming’s biggest surprise of 2018.

The greatest compliment I can give MyCareer is there are at least five storyline events I desperately want to tell you about, but can’t because to do so would spoil things. And much like real WWE, the best bits are the ones you don’t see coming. Suffice to say there are fun, often funny, moments involving Daniel Bryan, Kurt Angle, and Braun Strowman to name three, and those often cloudy progression elements have been eliminated.

MyCareer’s XP tree is now intuitive, neatly designed, and enjoyable to tinker with. Don’t want to open loot boxes for moves and entrances, as occurred last year and was justifiably slammed? Buy them outright using in-game currency. Ah, it’s all fabulous. For the first time in years I felt fully invested in my guy, Jason ‘Swim King’ Ocean, and was genuinely sad to see the storyline end.

Not that I’ve had much time to sulk. Just as Visual Concepts has clearly acted upon fan feedback in MyCareer, so too the game’s long-term time sink, Universe mode, feels revitalised by a raft of community-driven tweaks. There are some holdover quirks like being unable to delete promos, but generally this is a Strowman-sized upgrade on the bug-riddled fiascos of 2K18 and 2K19.

I’m seeing decent variety in cut-scenes and AI run-ins, and the option to sim matches and choose the winner, or switch to any wrestler (including your opponent) mid-bout, finally gives you complete booking control. Also neat is the ability to set the chances of each match type on any given show, meaning my personal favourite – three-on-three tags – get routinely added to Raw and Smackdown without my having to edit them in manually. An increase to six championships per show also expands your options significantly. Cool.

In the ring, 2K19 focusses on shoring up strengths of previous years, such as giving each wrestler a unique feel in both attributes and moveset, and eliminating the weaknesses. It’s slightly faster than last year, but still familiar, offering a pleasing sense of heft to its slams and suplexes, and placing the focus on emulating ‘real’ wrestling rather than being a pure win-at-all-costs brawler. This isn’t Street Fighter 5. It certainly isn’t No Mercy, whose time has long passed but is nonetheless used as a stick to hammer 2K with.

Yet its best new in-ring element cleverly feels both gamey and authentic. It’s called Payback, and exists as two small circles on your character’s HUD: one yellow, one red. Take damage and, much like Street Fighter 4’s revenge gauge, these meters fill and eventually enable you to unleash comeback moves like an instant recovery or possum pin. It sounds arcade-y but is also perfectly in line with what you see throughout WWE pay-per-views, as supposedly beaten wrestlers suddenly pull out last-minute wins.

All of which makes WWE 2K19 sounds like a five-star game, right? It’s certainly close, and in its finest form since the Smackdown years on PS2. The reason I have to dock a star, however, comes down to a four-word caveat mentioned earlier: “for the most part”, in regard to gameplay improvements making up for roster woes. While the loss of Ciampa, Cross and Kendrick is overcome, two semi-related decisions can’t be so readily dismissed.

The first is its DLC policy. As in previous years, you’re forced to pay extra for upcoming NXT talents such as the War Raiders, Ricochet, and Candice LaRae. I have no issue on that front; but charging for Mike and Maria Kanellis, who debuted as a couple on Smackdown in June 2017, is galling. As is having to fork out cash for the ‘accelerator’, which enables you to edit wrestler attributes rather than work with the game’s default ones. In 2018 that facility should be included as standard, just as it is in Madden, FIFA or MLB The Show.

Those games highlight 2K19’s other Achilles heel: live updates. Or rather, the lack thereof. The series’ rigid post-WrestleMania cut-off point means that other than paid-for DLC, any changes that take place in WWE after April are ignored until the following year’s edition. Baron Corbin shaved his head in June 2018, yet you’ll have to wait until October 2019 to see that replicated in-game. Bo Dallas and Curtis Axel introduced a new theme in August 2018, but you’ll have to wait 14 months to use it.

2K19’s contemporaries update their rosters on a weekly basis, and it’s time the WWE series made some attempt to do similar. Weekly might be a push; quarterly should not be. The lack of Corbin’s shorn noggin is perhaps forgivable given the work that goes into a new likeness. Choosing not to patch in an updated theme on day one, less so.

While that’s a down note to end on, remember that these are only minor flaws when compared to the positives found elsewhere. WWE 2K19 is a wonderful wrestling simulation that ticks countless boxes in terms of fan requests, then throws some delightful surprises in for good measure. I still can’t quite believe how great MyPlayer is. That alone makes this a must-play, and returns a floundering behemoth to championship glory. Maybe, just maybe, there’s hope for Roman Reigns yet.

A spectacular throwback to the era when wrestling games were must-own. Add live – or even quarterly – updates to 2K20 and it’ll be a first-ballot Hall of Famer.