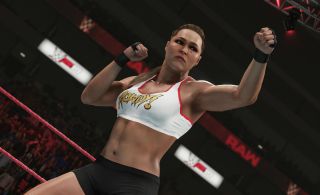 WWE 2K19 is confirmed for a release date of 9 October – and we now know its roster in full. Welcome surprises include Ronda Rousey, Rey Mysterio and Ted DiBiase, but four current stars are left off-disc, in Nikki Cross, Tommaso Ciampa, Brian Kendrick and Mike Kanellis. That's a curious move which has been met with fury by the game's community, and something GR will address in its upcoming review. Until then, you’ll find every confirmed superstar profiled in detail below.

Collectively known as The Undisputed Era, this foursome has run roughshod over developmental brand NXT over the past year. It’s not only their opponents who’ve suffered, however: Fish underwent knee surgery in early March which sidelined him for several months. A 2K series debut should at least bring some cheer to his recuperation.

This is CJ 'Lana' Perry's first playable appearance in the 2K series, alongside real-life husband Rusev and onscreen comrade Aiden English – but she isn't happy with her likeness. "Who is this? Never have I worn that gear or wrestled with short hair so I am very confused [as to] who this women is," she tweeted after its September reveal. Oops.

After turning 41 in June, Styles’ extended Indian summer shows no sign of slowing down. He’s cemented his reputation as the MVP of Smackdown via recent feuds with John Cena and Shinsuke Nakamura, and a long-term dream programme with Daniel Bryan beckons. 2K19 marks his third WWE video game appearance.

Former NXT skyscrapers Authors Of Pain were always 2K roster guarantees – what's less clear is whether they'll be accompanied with a manager in-game. They're no longer associated with ringside legend Paul Ellering, while a new link-up with Drake Maverick has come way too late for the latter's inclusion. Most likely scenario: if you want Ellering or Maverick, you'll need to find them as CAWs.

The long-time Dragon Gate favourite has struggled following a promising start on WWE cruiserweight show 205 Live, causing GR to turn him heel and pair him with countryman Hideo Itami in WWE 2K18 Universe Mode. I call this tandem the Rising Sons, and plan to add Shinsuke Nakamura as leader of the all-Japanese stable in WWE 2K19.

Two-thirds of the major players in NXT over the summer are confirmed for 2K19, with Black upgraded from DLC to on-disc roster. What's curious is that there's no mention yet of Tommaso Ciampa, who defeated Black for the NXT Championship in July. After his year-long feud with Gargano, it'd be the biggest shock possible were he to be omitted.

The on-and-off-and-in again tandem share eleven world titles between them, and that’s a number certain to rise with 26-year-old Bliss considered among WWE’s brightest prospects. James is at the other end of her career, but one more run with the gold isn’t out of the question given her evergreen in-ring performances.

The trio known as Sanity were called up from NXT to Smackdown in the spring, curiously minus Scottish lassie Nikki Cross – whose status for WWE 2K19 remains unknown. They've been offered little limelight so far, but all are credible workers, and the gargantuan Dain should come in for a monster push – literally and figuratively – when he eventually goes solo.

2K19’s debut trailer featured a glance at a load of wrestlers you’d expect to be on the roster, such as John Cena, Kane and Triple H. Fox’s appearance was a mild surprise, however. Injured since January, she was rumoured to be in WWE’s naughty books after a public argument with Ronda Rousey’s husband Travis Browne – but it now looks like that isn’t the case.

In recent times 2K has experimented with having the WCW versions of certain WWE favourites in-game – this year we get both flavours of Kevin Nash (AKA Diesel) and Scott Hall (Razor Ramon). A similarly themed Blayze alternate in her best-known guise, Madusa, would be very welcome, though is sadly unlikely given that on returning to WCW in 1995 she threw the WWF women's title into a trash can.