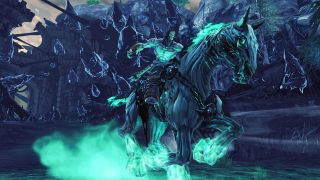 After a mistake that gave us an early EB Games listing, another leak for the Nintendo Switch version of Darksiders II Deathinitive Edition has surfaced. This time an official European distribution page for the game launched ahead of time, giving us plenty of details about the unannounced version of the hellish hack and slash.

The leak comes from Koch Media, who was purchased by THQ Nordic earlier this year. Their site says the Switch version of Darksiders II will launch on August 6, 2019 for €29,99. We don't know if the same release date and price point will apply to North America yet.

It's a long time coming as Darksiders II Deathinitive Edition launched on the PS4 in 2015, three years after the original game came out in 2012. Much of that delay was caused by THQ Nordic shutting down and developer Vigil Games disbanding in 2013.

Nordic Games, who picked up the Darksiders brand after THQ Nordic closed down, rebranded itself as THQ Nordic in 2016. They've been purchasing studios left and right, most recently acquiring German RPG developer Piranha Bytes.

The company also released Darksiders III last November to a warm reception, check out our Darksiders III review to see how it changed the franchises combat for the better.

While we don't have an official announcement from THQ Nordic, some fans hope that the third entry in the series did well enough to warrant a sequel. Senior designer Richard Vorodi did confirm that "the plan was always four" at Gamescom last year. We haven't heard anything since then, but THQ Nordic has over 80 games in development including Dead Island 2. Maybe Darksiders IIII is one of them.

If we're talking about unofficial action games, read up on what we know about Great Rune, the rumored collaboration between George R.R. Martin and FromSoftware.