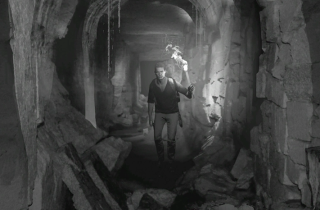 This is only going to really be spoilers if you care about stuff that didn’t make it into Uncharted 4, but check out the concept art gallery and it looks like there was a boat level we never got to play.

You can see more  in the images below, which are safe as they only show cut content. The video does show the level you played instead though and that's  late in the game, so definitely has a spoiler warning on it.

In among the images for a level called For Better or For Worse, are a selection of boating images featuring a rubber dingy that never appeared in the final game.

There are several images suggesting Nate and co were, at one point, making their way through a forest by boat. In the game itself there’s a short section where you take the jeep up a shallow river which possibly may have replaced it.

Later there's a slightly different version of Libertalia shown in the art (the rotten green buildings seen in the trailer). There’s talk of burst dams and floating in the finished game, and a few ptaches of water to swim though, but nothing like the level suggested by this concept art.

We know that at least one Uncharted 4 set piece was cut thanks to Sam Drake actor Troy Baker, and stuff gets dropped from games all the time so looks like this particular version of the level lives on only in the art.

There are other teasers of things that changed. Like this shot suggesting that the big car chase sequence might not have actually been in the jeep originally. That beige CV is actually in the parking lot in the final game, you just don't get to drive it.

There’s also an interesting look at the evolution of the younger Drake brothers, showing just how minute the attention to detail is when creating a character.