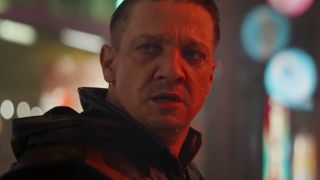 I love me some Avengers 4: Endgame toy leaks. Far away from the ever-watchful eye of Marvel Studios, you can always count on some big reveals and spoilers to be spotted in a random store shelf anywhere in the world.

Case in point? We could very well have just seen the world-first Endgame Ronin glimpse in the wild, complete with costume. Not only that, but there’s potentially a returning MCU fan favourite waiting in the wings… so, yeah, possible spoilers to follow.

First up, Ronin. While the Avengers: Endgame trailer did show Clint Barton (AKA Hawkeye) looking a bit glum in a Japanese street, we’ve not yet seen him in action as alter-ego Ronin. Well, here he is, as spotted by an eagle-eyed Twitter user.

Pretty nifty, right? I’m digging that whole ninja thing he’s got going on and, alongside that sword, you’ve got to wonder what sort of damage he could do to the likes of Thanos if he ever gets the chance. Put Hawkeye and this version of Ronin side-by-side and you’ve got a ready-made ‘You vs. the man she told you not to worry about’ meme, I’m telling you.

But that’s not all. A certain someone from Thor: Ragnarok who was conspicuously absent in Avengers: Infinity War is showing up – at least in toy form.

Yep, Valkyrie is back. Whether this counts as confirmation that Tessa Thompson is in Avengers: Endgame is still up in the air, but the box art on the figure lines up nicely with previous leaks showing off a Quantum Realm/time travel get-up that the likes of Rocket and Thor have had to put on. At least white suits Valkyrie more than the trash panda. Take a look.

There you have it. Ronin looking every bit the coolest person on the planet, with sword in tow, and Tessa Thompson is potentially back as Valkyrie for another show-stealing MCU performance. Another two reasons, then, to be excited for Avengers: Endgame. That’s now 1,000,002 by my count.

That might have ruined some popular Avengers 4 theories but, then again, that just makes things a little bit more unpredictable...