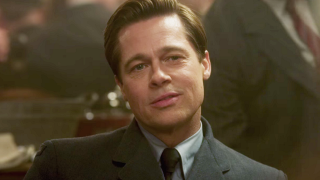 Do me a favor before you read this article: go to your kitchen, and grab the salt. Pour it, ever so gently, into your hand, so that you have a single grain resting in your palm. Okay, ready? Here goes: a new Deadpool 2 casting rumor suggests that Brad Pitt will be playing the role of time-traveling mutant, Cable.

You may now consume the grain of salt from earlier.

This nigh-unbelievable idea comes to the internet courtesy of Jeff Sneider, industry insider and editor-in-chief of The Tracking Board. And his tweet mentioning it is almost as baffling as the rumor itself:

Will be interesting to see if Brad Pitt plays Cable. In meantime, sounds like Sony is working on a Spider-Man sequel https://t.co/FsCTxs30DhMarch 22, 2017

To be clear, Sneider is musing for one whole sentence before switching gears to an unrelated topic (Spider-Man), and linking to a profile piece on actress Isabella Amara, who is in Spider-Man: Homecoming. It would be like me tweeting, "It sure would be neat if Venom showed up in Guardians of the Galaxy 3. Anyway, the state fair is coming up!" and then linking to a list of touring dates for Nickelback, which just happens to include said fair.

Please, 20th Century Fox, just cast someone and make it official. These rumors are getting out of hand.