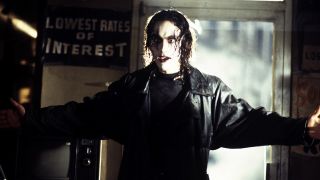 The proposed remake of The Crow is one of those movies that's spent years in development hell, losing directors and stars left and right. If that weren't bad enough, its studio collapsed right in the middle of all that, leaving the fate of the comic book adaptation up in the air.

Despite rumors that Corin Hardy had also jumped ship, it seems like he's still very much attached and is bringing another contender into the mix for the role of Eric Draven. Game of Thrones' Jason Momoa is reportedly "in talks" to play the murdered rock star, according to Mashable. Backing up the site's post is an Instagram pic from Momoa featuring he and Hardy celebrating over a pint after "sealing the deal":

The only way to officially seal the deal as men Is a pint of black beauty. @guinness #sealthedeal #wearemarriednowfucker. #greatnewstocome. #dreamjob #cantwaittotelltheworld ALOHA ED 👿😜

Hardy is currently working on assembling a cast for The Crow, so there's no other film Momoa can be referring to. The site's sources say that despite his obligations on Justice League and his solo DC outing Aquaman, they're working around his schedule to make sure he can play Draven. On the surface, he shares a slight physical similarity - his face, not his muscles - to Brandon Lee who tackled the role in Alex Proyas' 1994 adaptation. But the part will require more than sheer brute force.

Details on the plot have yet to be confirmed and we've heard so many rumors over the years, it's hard to know what's what. Before Relativity Media went bankrupt, there was talk of Andrea Riseborough taking the role of Top Dollar, the villainous leader of the crime group responsible for killing Draven's girlfriend. Whether she's still involved is another thing that's up in the air. But if Momoa's casting rumor turns out to be true, we can expect the rest of the ensemble to be confirmed shortly.