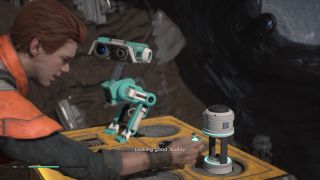 Using the Star Wars Jedi Fallen Order Stim Canisters BD-1 fires out to heal keeps you alive, which is obviously good. So of course you want to find and carry as many as you can. There are 10 in the game and all of them are tucked away to varying degrees, requiring you search out secret areas and routes to locate them.

Making things even tricker is that some Star Wars Jedi Fallen Order Stim locations are in areas you pass through before you have the power to fully explore them, meaning you'll have to backtrack and re-explore places you've already been to. Because of that, this guide is ordered in the way that makes the most sense as you play through the story.

For this first canister you’ll have to pick up the wall run force ability, which is unlocked very early in the game during your first trip to Bogano. Once you’ve picked it up from the ancient vault, head back to the Mantis. From the Fractured Plain Meditation spot, veer left, hop over the platforms and you’ll see an amphitheater area. You’ll then see a narrow gap you can wall run to get across. Head through and drop down the hole in the middle to land next to the canister upgrade.

From the Mantis, head right and you should see a lowered platform where a stormtrooper is being mauled. Head to your left and enter a dark cave along the path via a cliff side opening. Illuminate the cave with your saber and follow it through until you can hop up to a raised platform where the canister is.

This upgrade is easy to find but a pain to unlock. From the Mantis, head to your right and you should find a track that leads you underneath the landing pad. You’ll see a big ball you need to push around with Force Push inside a cage. Approach the puzzle from the left hand side and push it along the white track so that it lands in the socket. The door will open and you can grab your stim.

Get down to the area with multiple zip lines where you encountered the Second Sister in Zeffo and you’ll find a long bridge with a Zipline very close to the far doorway. Use BD-1’s Powered Zipline ability to travel up the line and back towards the upper meditation point, but you actually want to dodge out of the Zipline to land on the platform in the middle of the journey. Once you land it (it’s quite tricky) simply push the doorway ahead to find the stim canister.

On your return visit to Kashyyyk you’ll get the underwater breather and head to Origin Lake. Near the end of this area there’s a massive wall to climb, the only way forward for Cal. You want to face away from this wall and you’ll see those bouncy green plants. Ride them up to a higher platform where you’ll find this stim can.

Head down to the Ice Caves where the first mediation point next to the elevator is. To your left will be an icy platform where a Jotaz lurks. Dice it up then look ahead to see a vine you can flip to and use pull in mid-air to grab. Swing to another vine from this one and you will find the stim canister at the end of the gauntlet.

Once you get back to Zeffo after gaining the Jedi Flip on Kashyyk, you can now jump into the giant wreckage of the Venator from the round hole near the probe droids in the Crash Site area. Press through that area until you get right to the end and you’ll find this Stim canister upgrade out in the open ready to unlock. You’ve probably seen it before from below!

During the course of the story you’ll make your way inside of the Nightmare Ruins to deal with the Nightsister and the creepy cloaked man. From the outside of the building, turn and face the doorway and then head right and follow the path around, which has you wall-running and fighting spiders. You’ll eventually get to a branch you can walk across to reach a platform with this stim canister on. If you keep following the path it’s very hard to miss.