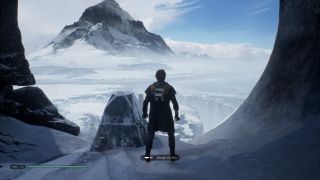 Star Wars: Jedi Fallen Order has a bit of a Metroidvania vibe going on, so naturally it's filled with secrets to uncover. As level designer Nicholas Cameron explained on Twitter, one of the game's most touching secrets is hidden in plain sight: a tribute to Cameron's late father, Martin Cameron.

"A memorial placed at a meditation site often used by the venerable Jedi Master Mari Ti 'Bucky' Kam'Ron. He returned here many times over the course of his life to reflect on his adventures and achievements."

As Nicholas Cameron explained on Twitter, his father worked as a game artist back in the day, and even contributed to a Star Wars game of his own: 1997's X-Wing vs. TIE Fighter. Sadly, he passed away last year, so he wasn't able to play the Star Wars game his son worked on.

"I'll always be grateful that he got to know I'd be working on [Jedi Fallen Order], but dang is it rough he didn't get to see me ship it," Nicholas Cameron said. "All of that makes leaving this tribute to him extra special, because it exists within a world that we shared. And now he gets to live on as a Jedi in the [Star Wars] world."

If you're curious, here's a tweet with some pictures of the true Bucky:

I forgot to include some pictures of him, including the picture of him in the hat that's at the tribute! pic.twitter.com/BczoDxXmZjNovember 19, 2019