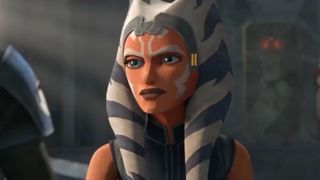 You were probably too busy marvelling at Darth Maul and Ahsoka in the new Star Wars: Clone Wars season 7 trailer to notice a blink-and-you’ll-miss-it appearance from a character on the other big Star Wars animated series, Star Wars: Rebels.

One of Rebels’ leads, Kanan Jarrus (original name: Caleb Dume), is tucked away in the season 7 teaser – as spotted on Twitter by Thomas L. Harper. He can be seen standing next to his then-Jedi Master, Depa Billaba. With this being a pre-Order 66 story, though, he’s obviously a lot more fresh-faced (and shorter), so he isn’t as easy to pick out at first glimpse. He’s there, though, just across from Yoda.

Is that a young Caleb Dume standing beside Depa Billaba I see??👀👀👀 pic.twitter.com/uJxmuMdutiJanuary 22, 2020

With Star Wars: Clone Wars bridging the gap between Attack of the Clones and Revenge of the Sith, it was only a matter of time before major Rebels characters would start showing up – but Jarrus’ brief cameo hints at a tragic end to the series. Order 66 is looming large and, if you’ve followed the Rebels series, you’ll know that the death of Jarrus’ Jedi Master during that event serves as ample motivation for the character.

But this isn’t the first time Kanan Jarrus has crossed over into other Star Wars stories. If you’re unfamiliar with Rebels, you might best know the character, voiced by Freddie Prinze Jr., among the horde of Jedi guiding Rey at the conclusion of Star Wars: The Rise of Skywalker.

Star Wars: The Clone Wars returns for its seventh and final season on Disney Plus from February 21.

Opinion: The Mandalorian’s final twist shows off the best and worst of Star Wars