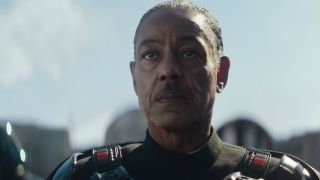 What comes to mind when you think of Star Wars? Maybe it’s lightsabers. Or The Force. Or even Darth Vader. Each is quintessentially Star Wars and, yet, there’s a whole galaxy (far, far away) to play in beyond that – one that has mostly been left untouched for 40 years outside a handful of books, comics, and video games.

The Mandalorian’s first season was the perfect antidote for those who were eager for something different; a slice of sedate Star Wars that wasn’t concerned with the world of Jedi and Sith. It was something beneath those lofty clashes and dealt with matters far smaller – up until the show’s very final twist. The emergence of the Darksaber, while excitedly drawing from a less mainstream Star Wars story, could cause The Mandalorian season 2 to dip into a tried-and-tested pool of lore, away from what made the first season so refreshing.

But first, what is the Darksaber? Star Wars fans will have seen the weapon before – in the Clone Wars TV series where it forms an integral part of Mandalorian tradition. Inevitably, it ends up with the series’ villains, including a certain Darth Maul, only to be won back by our heroes. Some time after that, Moff Gideon gets his hands on the Darksaber – we don’t know how just yet – and now it’s set to be the centrepiece for The Mandalorian’s immediate future.

While Gideon slicing through his ship’s wreckage with the Darksaber doesn’t wipe away seven episodes of sustained, subtle world-building, it does draw the eye from much of what made The Mandalorian successful. By placing it at the very end of the finale, the reveal seems set to dominate the discussion in the run up to season 2.

The Darksaber hints at a potential change in direction for the series. What could have been an exciting cat-and-mouse chase between Gideon and the entreating Mandalorian (with Baby Yoda in tow and in need of some training, Mando-style) may now transform into a battle over the fate of the Darksaber. It’s something that feels like less of an enticing cliffhanger, and more of a prelude to a Skywalker-lite adventure akin to what we have already seen nine times on the big screen since 1977’s A New Hope.

That reliance on lightsabers and other familiar iconography as a safety net looks like a lack of faith in The Mandalorian’s languid pace (which can count a slow-moving boat chase and short prison breakout among its major action set-pieces) and is something the franchise should move away from. Deadline has even reported that “established characters” are set to show up in the new season, which – while a good hook for new potential viewers – feels unnecessary for a show that has forged its own path.

Star Wars is still Star Wars without lightsabers and familiar faces – and The Mandalorian would do well to preach that as its mantra moving forward, especially in light of Star Wars: The Rise of Skywalker and its definitive ending to the main saga. The potential for a fresh slate is enticing, and The Mandalorian should be at the forefront of that franchise-shaping conversation.

Another scene from The Mandalorian finale showcases the strengths of the possible new era of Star Wars, should creator Jon Favreau and company wish to lean into it. A Stormtrooper duo – played by Jason Sudeikis and Adam Pally – goof around for five minutes. It’s unlike anything seen before in Star Wars, and for good reason. Taika Waititi (who directed the episode and has been linked to helming a fully-fledged movie in the universe) understands that Star Wars shouldn’t just be about what’s going on at the top of the Empire’s food chain. Sometimes, it’s more entertaining to focus on the little man. The Mandalorian knows that for the most part.

Star Wars has never had the opportunity to show us this many facets of normal life in a galaxy far, far away. Disney Plus opens up so many options – a workplace comedy set in a Cantina? Why not? – and LucasFilm shouldn’t rely on the series’ most iconic weapons; they should have the confidence to play the series’ essentially unlimited sandbox.

The Mandalorian will no doubt still work. Make no mistake about it, the Darksaber is still hugely exciting. In the same way that Baby Yoda took something overly familiar and put a new twist on it, there’s a hint of mystery to drive the second season forward. We know what lightsabers are, but many people don’t know exactly what a Darksaber is. Plus, those who have Googled the blade since The Mandalorian finished may have gone back to watch The Clone Wars series, which is only a good thing as it’s regularly excellent.

So, what’s next? Who knows – and that’s the important part. The Mandalorian takes place in the relatively unexplored space between Return of the Jedi and The Force Awakens on the Star Wars timeline, meaning there’s a huge unknown period to explore.

Star Wars can be so many things. It can be Jawas. It can be the journey of Clone Wars character Ahsoka. It can even be an older, bearded Jar Jar. With the Darksaber, there’s a suggestion that the series will retreat into the warm, comfy space slippers that made LucasFilm billions of dollars. But it’s also a chance to try something new with a franchise that has the time and money to be whatever it wishes to be – and that critical juncture starts with The Mandalorian’s return this fall.