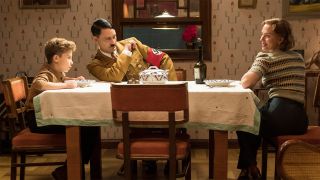 Lucasfilm reportedly wants filmmaker Taika Waititi to develop a Star Wars movie. At this point, it isn't clear whether it's the same Star Wars movie being produced by Marvel Studios' Kevin Feige or an entirely new project.

According to sources at THR, Waititi – who directed Thor: Ragnarok and The Mandalorian's highly-acclaimed season 1 finale – has been approached to develop an unannounced Star Wars movie. With the spirited conversation surrounding Star Wars: The Rise of Skywalker still very much ongoing, it's unclear what direction the franchise will take next.

It was reported in September that MCU mastermind Kevin Feige was developing a new Star Wars movie. Disney confirmed the reports to THR, saying: "With the close of the Skywalker Saga, Kathy is pursuing a new era in Star Wars storytelling, and knowing what a die-hard fan Kevin is, it made sense for these two extraordinary producers to work on a Star Wars film together."

Waititi and Feige worked closely together on Thor: Ragnarok as director and producer, respectively, so it would make sense for the duo to team up on a Star Wars movie. THR reached out to Disney and Lucasfilm for clarification, but heard no response. Taika has himself responded to the news with a Tweet, posing an image of the cover to Fleetwood Mac's iconic record Rumours.

With one formidable filmmaker involved with the franchise and another being approached to join, Star Wars seems to have a promising future ahead. We'll be sure to keep you up to date on developments as they relate to Waititi's potential role in the Star Wars cinematic universe.

Until then, here's everything we know about the new Star Wars movies releasing in the next few years.